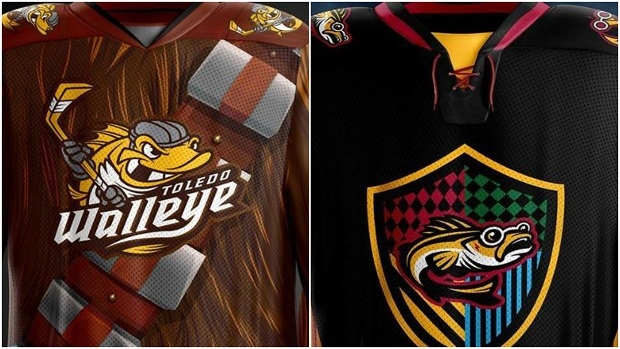 Last season, the Toledo Walleye were one of the best teams in sports when it came to the different theme jerseys they rocked throughout the year.

From a Rocky themed jersey to a Power Rangers themed jersey, they did not disappoint when their theme nights rolled around.

This season, the Walleye are at it again with some more fantastic theme nights and the jerseys they designed for the special nights are pretty awesome.

This upcoming Saturday, the Walleye will host their annual Star Wars Night when they take on the Wheeling Nailers and the team will rock some incredible Chewbacca themed jerseys for the game.

In an arena not so far away, we’ll wear these Chewbacca jerseys for ‘Star Wars Night’ on Saturday, 12/9. ⭐️

Next month, they’ll rock some Gryffindor themed jerseys when they host their Harry Potter Tribute Night on January 6th against the Manchester Monarchs.

Earlier this year, they rocked some Iron Man inspired jerseys when they hosted their Marvel Super Hero Night.

They will also rock a Green Goaldiggers jersey for Hockey Heritage Weekend in February and an All-Black Walleye Jersey in March for Zombie Night, but they have not leaked those jerseys yet.