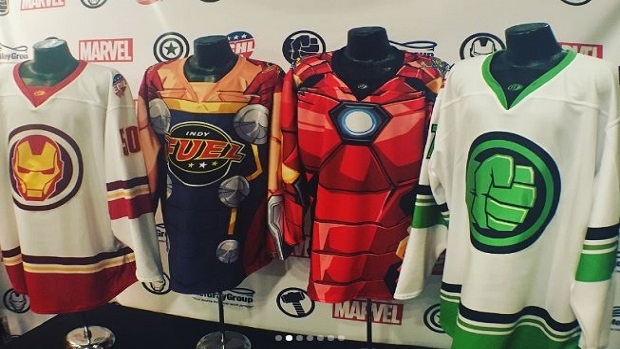 The ECHL and Marvel are teaming up this year to bring Marvel Super Hero themed games to all 27 cities in the league.

On Wednesday, representatives from the ECHL, Marvel, MeiGray Grouo and the AMC series Comic Book Men discussed the brand new relationship at Kevin Smith’s comic book shop Jay and Silent Bob’s Secret Stash and unveiled some of the jerseys that will be worn this season.

ECHL commissioner Brian McKenna and Vice President and Executive Editor of Marvel Digital Media Ryan Penagos shared some of the plans for the upcoming season and what the partnership brings to the league.

"It adds an element of entertainment to what we're doing across the League," Commissioner Brian McKenna on @Marvel program pic.twitter.com/kL9j3jRhgg

"It's not just putting the @Marvel brand on something... it's incorporating it into an experience" - @AgentM on today's announcement pic.twitter.com/SN15lmMbKc

The Toledo Walleye are the only ECHL team that’s shared their Marvel Super Hero Night jerseys online, while the ECHL previewed a few others during the official release.

.@Marvel and @ECHL have joined forces to create this jersey for our 'Marvel Super Hero Night' on Saturday, November 4. #MarvelSuperHeroNight pic.twitter.com/CiEM4Wf3GA

Those jerseys though..🔥 Swipe ↔️↔️

The Utah Grizzlies will host the first ECHL Marvel Super Hero Night this season on October 28.

This theme night should be a hit in every single city.