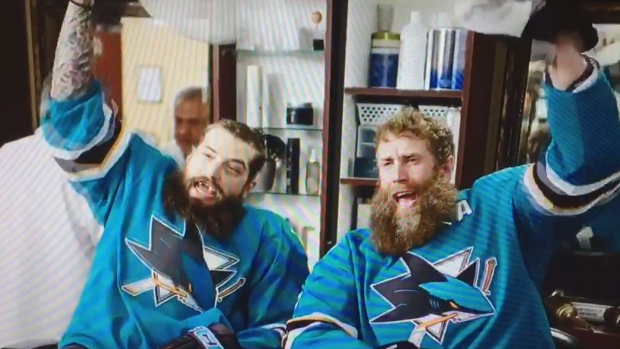 Brent Burns has turned into an NHL fan favourite over the past few years. Aside from his outstanding facial hair and hilarious personality, the 31-year-old has proven on many occasions that he can get the job done from any position on the ice.

We saw Joe Thornton recently take a liking to Burns’ style and grow out his beard as well, and now the two are becoming everyone’s favourite duo in the NHL with Thornton riding under Burns’ wing.

Jumbo and @Burnzie88 are legitimately talking about how they take care of their beards. #WCH2016 pic.twitter.com/oWRupeLOie

Since the San Jose Sharks' duo have the best facial hair in the league, it’s only fitting that they star in their own haircut commercial in San Jose.

Thornton and Burns certainly know how to have a good time and you can tell by the way they’re holding back from cracking up while saying their lines. It’s too bad they didn’t release the bloopers for this commercial because we’re guessing there’s a few golden moments in that batch.

Perhaps these two could start their own comedy show once they hang up the skates because they were absolutely hilarious in this commercial.