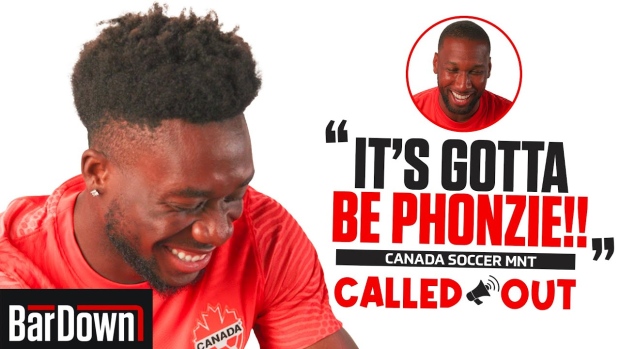 If you’ve been around BarDown for a while you’re probably familiar with our segment “Called Out” where we get teammates to call each other out for fun!

We’re just a few days away from the 2022 FIFA World Cup and with Canada making their first World Cup appearance in 36 years, we decided to put the Canadian Men’s National team players in the hot seat before they head to Qatar.

Have you ever wondered which Team Canada player cellys a little too hard in training? Who has the worst taste in music? Who reads the most transfer gossip? Now you can find out from the players themselves!

Liam Millar is definitely the king of watching his own “Skills, Goals, Assists” compilations on Youtube but Alphonso Davies is a close second for that spot.

Stephen Eustáquio and Alistair Johnston both think the other has the worst taste in music with Eustáquio’s Portuguese music going head to head with Johnston’s country music for the title of worst music in the dressing room.

If there’s one thing that the entire team agrees on it’s that Alphonso Davies is the most likely to drop an album, with Samuel Adekugbe even going as far as to say that Davies is convinced he’s Drake!

So album dropping soon or…?