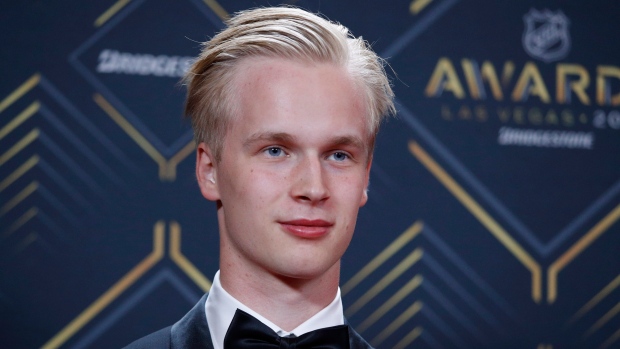 With a week away from training camp kicking off, NHL players are starting to informally get together for pre-camp skates.

Out in Vancouver, the reigning rookie of the year, Elias Pettersson, was on the ice Wednesday at Rogers Arena with a number of his Canucks teammates.

Benn waiting all summer for this! 🚨🔥 pic.twitter.com/rAAXYW2lys

Canucks fans were quick to point out that Pettersson seemed to have hit the gym hard this summer, as his upper-body appears to be much bigger.

After the skate, Pettersson was inevitably asked about his summertime training regiment but made it be clear he's no Captain America.

"This summer I knew what I was preparing for." @_EPettersson discusses getting ready for his second season and having a better idea of what to expect. pic.twitter.com/O1jW3sO00r

Pettersson started the season hot, amassing 54 points in his first 49 career NHL games, but tailed off in the second half of the season, hitting somewhat of a rookie wall with just 12 points in the final 22 games.

With a full season under his belt and a off-season spent in the gym, don't be surprised if the 20-year-old finds more consistency in the second-half of his sophomore season.

“At the end of last season I felt kind of tired and not 100% energy towards every game.

“This summer I knew what I was preparing for. So I’ve been working a lot on my conditioning to get more leg power and hopefully to play a full 82-game season and hopefully playoffs.”

Canucks fans are pretty stoked to see Pettersson's bulk and are already fantasizing about what his season could entail.

This is what can happen when you don’t make the playoffs! Extra get jacked time!

Who knew we were getting a glimpse of Elias Pettersson’s evolution two seasons ago. pic.twitter.com/rlgjBDkbGV

If those pipe cleaners on the left could snipe like that... Imagine the velocity with those new guns!!