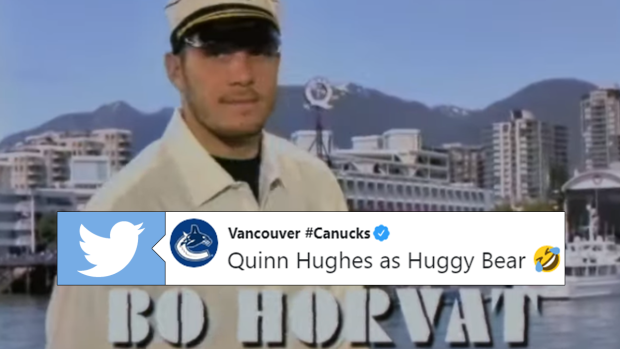 The Vancouver Canucks are really having a lot of fun this year. With this season marking their 50th season, they’re executing all sorts of activations, including lots of different ways of “throwing it back”.

Sure, their Flying V and Flying Skate throwback jerseys are one thing. On Saturday, they stepped it WAAAAY up a notch with an awful, yet incredible “Love Boat” parody.

Honestly don’t know how to feel after watching that. Do I laugh? Do I cry? Do I wash my hands?

If you aren’t familiar with the show, it was a popular romantic sitcom during the late 70’s and 80’s. It featured a recurring cast getting into all sorts of humourous and romantic adventures. Based on that description, is the first thing you thought of the Canucks?

Nah, us neither. But we’re here for it.

Hello, yes, whoever’s in charge? More of this, please.

Not quite sure if including Starsky and Hutch’s Huggy Bear was a mistake or not, but we’re going to let it slide.

You've been killing it with stuff like this this year. Keep it up.

Where do we get our tickets to aboard with the crew? #Canucks

You guys are really putting some work into these themed nights.....awesome!