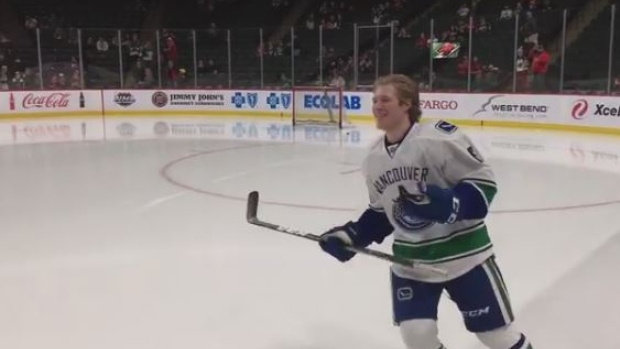 The Burnsville, Minnesota native was playing for the University of North Dakota on Friday night and was part of the wild double-overtime game. On Saturday afternoon, he made his NHL debut with the Vancouver Canucks in his own backyard at the Xcel Energy Center.

Since Boeser was making his NHL debut, you can bet his teammates set him up for the classic rookie pre-game skate initiation.

Welcome to the #NHL, Brock Boeser. (Via @canucks)

It's crazy how Friday morning the youngster had the Frozen Four on his mind and then less than 24 hours later he was preparing to play in his first ever NHL game.

Boeser, in the house!

To make his debut even better, he ended up scoring his first NHL goal right down the road from his hometown.

Horvat went hard to the net, Kuemper made the save, Boeser scooped in the rebound. 3-0 Vancouver, 8 mins to play in the 2nd.

Now that's how you get your NHL career started.