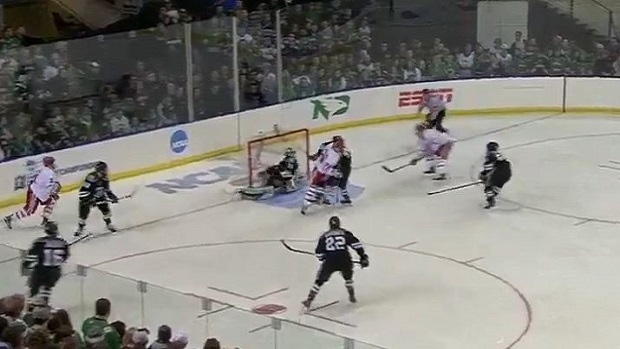 The University of North Dakota and Boston University went toe-to-toe to kick off the 2017 NCAA Men’s Division I Hockey Tournament on Friday, but you would think it was the final game based on how they performed.

Boston University opened up the third period with two goals in just under four minutes to take a 3-1 lead, but a glass-shattering hit midway through the third period courtesy of North Dakota’s Mike Gornall helped turn things around.

Shortly after the hit, Gornall’s team responded with two goals in just under three and a half minutes to force the game to overtime. Nothing was decided between the two teams in the first extra frame, so the game went to double overtime.

Midway through the second overtime period, Arizona Coyotes prospect Clayton Keller made a beautiful pass to Boston Bruins prospect Charlie McAvoy, who made no mistake finding the back of the net.

ICYMI: Boston U took down defending champ North Dakota on a beautiful pass from Keller to McAvoy! #NCAAHockey pic.twitter.com/lCIY817XOM

It doesn’t get much better than that; opening up the tournament with a double-overtime victory to eliminate the defending champions.

March really is full of madness.