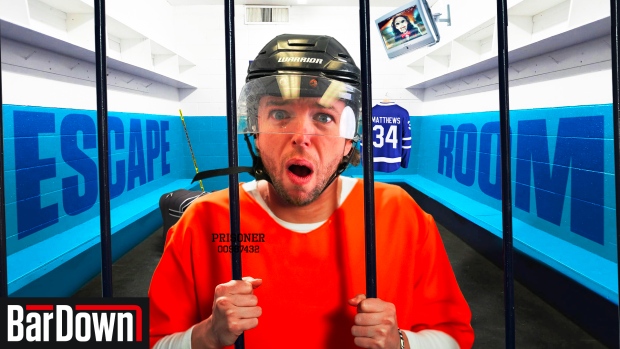 In a race against the clock (and each other), the BarDown squad had 45 minutes to complete the ultimate hockey-themed escape room. With the help from some of their ASHL hockey team, BarDown had two teams competing in order to see who could hit the ice first in their weekly beer league hockey game.

Corwin led the charge for Team #1, drafting Hunter, Lukas and Colt, who are all members of BarDown’s ASHL team. The only BarDown member that Corwin drafted was Josh (which proved to be a bit of a mistake further down the road).

Jesse, on the other hand, comprised Team #2 of classic BarDown members, including Luca, DZ and Eric. With Rob (ASHL) and Daniel also joining the fold, the two teams certainly had different approaches to escaping their escape rooms.

With everything set in place, including jerseys, pucks, sticks, maps and combination locks, the teams were separated into their respective rooms and began searching for ways to escape.

While there was some confusion at first, with both teams struggling when it came to decoding the goalie mask puzzle in particular, eventually they hit their stride and completed the rest of the challenges in a reasonable amount of time.

In the end, it was a lot closer than you might think. The team that emerged victorious proceeded to hit the ice. And the team that lost?

Well, they had to sit in the dressing room and wait for their chance to play.

Overall, both teams had an amazing time in the “first annual” BarDown escape room. As for next year, let’s just hope some of the players become strong enough to open a combination lock… when you have the right combination in the first place.

A special hat tip to BarDown’s own Matt Hempstead, who put together some amazing puzzles for our teams to solve.

Check out the video HERE!