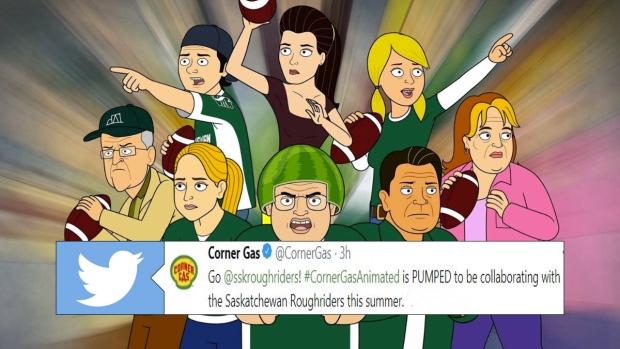 Corner Gas was a Canadian television sitcom that took place in the fictional town of Dog River, Saskatchewan that ran for six seasons from 2004 to 2009, and now the cast and crew are back with a brand new series, Corner Gas Animated.

With the 2018 CFL season set to get underway on Thursday night and the Saskatchewan Roughriders opening their season at home on Friday night against the Toronto Argonauts, the Corner Gas team announced a new partnership with the Roughriders that will start as early as Friday.

The new series is set to make its CTV debut on Sunday, June 17, so the collaboration comes at a perfect time for both parties. In the new collaboration, the two Canadian icons band together to share Rider Pride as the show will include the cast cheering on the Riders at Mosaic Stadium, Rider t-shirts featuring the Corner Gas Animated characters which will be sold at the team store, as well as contests for fans to win tickets to Regina, a Roughriders home game, and Corner Gas Animated merchandise.

The @sskroughriders are teaming up with #CornerGas Animated this season. #CFLKickoff • Catch the #Roughriders’ home opener against the #Argonauts LIVE across TSN at 8:30pm ET/5:30pm PT.

When Canadians think of Saskatchewan they think of the Roughriders and Corner Gas, so this should make for a fantastic collaboration. If you’re wondering just how much Corner Gas is admired in Saskatchewan, April 13, 2009, was declared “Corner Gas Day” by then-Saskatchewan premier Brad Wall.