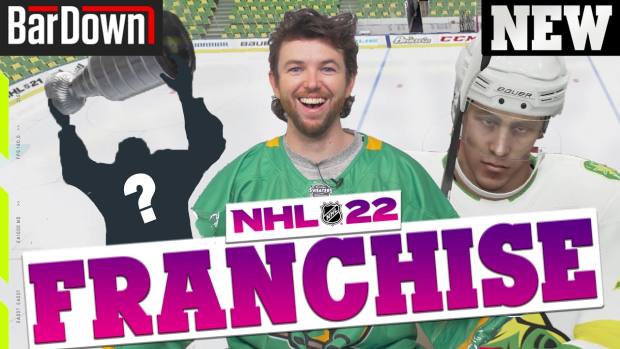 Anyone that has played Franchise Mode in the NHL series of video games can relate to the following video.

Our resident NHL video game slayer Corwin McCallum (seriously, this guy has spent SO MUCH time sitting in front of a camera playing NHL video games) returned to the iconic BarDown couch to deliver his latest version of Franchise Mode. Playing as the familiar Seattle Space Cadets (even though the Kraken already… never mind), Corwin makes his way through the regular season and battles for a position in the playoffs.

We won’t type out any spoilers above the video, but just beware of any text located below the video because WE SPOILIN’ DOWN THERE.

As warned above, there are spoilers down here.

Corwin (also known as Paul Byron) begins the video as a bubble team fighting for a position in the playoffs. The up-and-down season certainly reached a low point when Corwin – ever a maestro for the details – accidentally waives Alex Pietrangelo. The Seattle Space Cadets loss is the Ottawa Senators gain, have a nice career, Alex!

On top of that, can we just talk about how wild it is to acquire Patrik Laine on a team that already has Alex Ovechkin? Two of the best shots in the league on one squad, can you imagine what it would be like trying to defend those two on the power-play?!

Finally, we can’t wrap up this recap without bringing up the most upsetting part of all. Corwin – a die-hard Toronto Maple Leafs in the non-Franchise Mode world – couldn’t close out a series despite being up 3-1. Sound familiar?