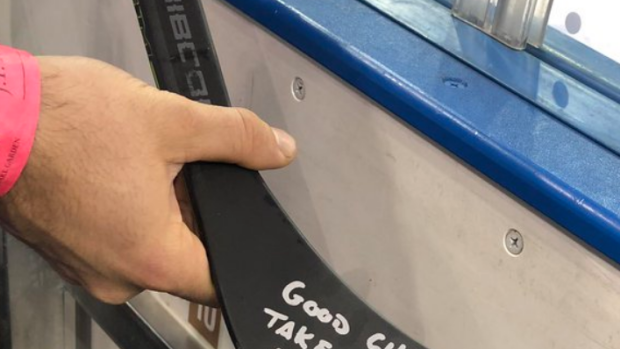 Fans will do anything to try and get the best players in hockey like Sidney Crosby off their game, including chirping them when they're in the penalty box.  Fans are literally right there and as much players pretend like they don't hear what the fans are saying to them, they definitely hear every single chirp.

Wednesday night, the Penguins were in New York to face the Rangers and Crosby had a goal and an assist in the win.  He also took one penalty and apparently heard every chirp from this fan while in the box because after the game, he got the Pens' trainer to give the fan this stick:

@RickCarpiniello - funny story from last night’s game. Guy sitting next to penalty box was lighting up Sid all game with some fantastic chirps. A trainer delivered this to him after the final buzzer. pic.twitter.com/4DZf9ZtlxF

Is Crosby the biggest beauty in the NHL?  Yes, yes he is.

That's a great move by Crosby. May have actually won over at least one @NYRangers fan.

Shhh. I already grudgingly respect Crosby. Don't make me start to like him....

If you're wondering what the chirps were, we are too, and luckily for us someone replied to the picture on Twitter to give some insight to that topic.

Was sitting right near him. One of my favorites: “Sid, when Gatorade was looking for a spokesman, they wanted someone tough and they considered you but signed Justin Bieber instead.”

yes. The whole night. He was LOUD