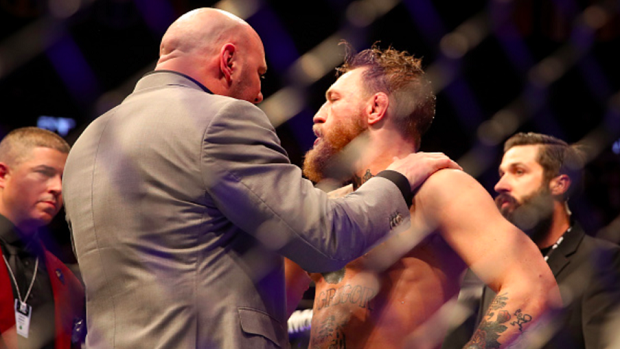 Earlier this week, Conor McGregor posted screenshots of his private conversations with UFC President Dana White, in which he’s pushing for a fight with Diego "The Nightmare" Sanchez.

To Diego Sanchez...
I seen your recent comments about your final bout and I am in!
After you fought Pereira, I had requested for myself and you to compete in Dublin. This was back in February when I was working on opposition for my season, pre covid.
Good luck this weekend! pic.twitter.com/Y0hf6Zr7XF

Here’s the finish of that exchange. Pre covid. Pre retirement.
Never turned down offer of Tony as was suggested at the time. I stated months in advance (early February) that I was not interested in being an alternate for two consistent pullouts.
Pushed for my own scheduled bouts pic.twitter.com/jXQD2dTWrL

Conor ended by reiterating how hard he was pushing for his season.

I was pushing hard for the season.
Multiple opponents, multiple dates offered throughout. All to take place back to back.
Then when covid hit and the talk was that I would have to wait for crowds again, I walked away from the situation. I was waiting long enough at that stage.

Last night, White responded to McGregor’s tea-spilling, saying posting private conversations is one of the dirtiest things you could do.

Dana White on Conor McGregor sharing the screenshots between he & Dana about Diego Sanchez Fight and says Conor posting them is one of the dirtiest things you can do #UFC253 pic.twitter.com/7rocTdGJe4

Hey, we don’t love receipt posting either, but Dana has an excellent point about Diego’s age.

Conor has already responded to the statement, saying that White was already in the wrong when he stated McGregor was turning down fights.

Code was broke when you lied about me turning down fights mate. I said Justin in May and you went and said I did not want to fight. It’s not about Diego. Diego was a filler to get more fights in.
Also you have been involved in Manny talks the legal letters are there.
Stop lying.

This definitely isn’t the last we’ll be hearing of this drama, so stay tuned, folks