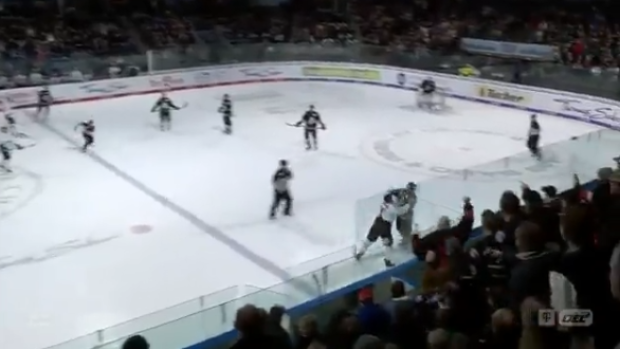 During the second period of action,  Wild Wing left winger Stefano Giliati was assessed a penalty. As he stood in the box, a member of the Ice Tigers, Dane Fox, skated over to taunt Giliati.

With the door not fully closed, Gilati stepped out and rushed at Fox, bringing the former Erie Otter to the ice before landing a couple of blows before the referees could intervene.

Giliati spent four years in the QMJHL primarily with the Lewiston MAINEiacs before spending parts of four seasons with the Toronto Marlies and Norfolk Admirals.

Fox spent time with the London Knights and Erie Otters where he skated on a line with Connor McDavid. The Vancouver Canucks signed Fox to an entry-level contract before he was later traded to the Carolina Hurricanes.

Players that prematurely leave the penalty box are automatically assessed a major and a game misconduct. Both Giliati and Fox were removed from the game.