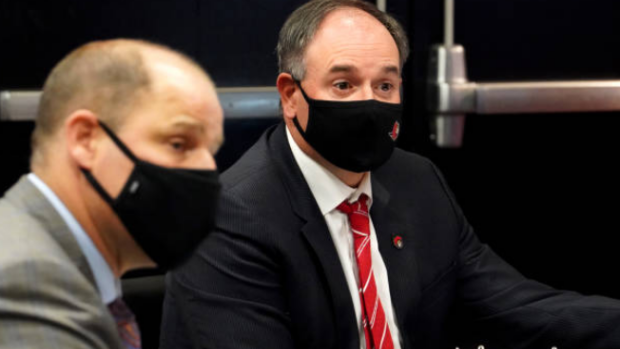 On Tuesday, the Ottawa Senators signed general manager Pierre Dorion to an extension that will keep him around O-Town through the 2024-25 season. Since being hired as the GM, Dorion’s Sens hold a record of 149-180-44, while qualifying for playoffs once in his inaugural season and subsequently falling one win short of the Stanley Cup Final.

There has been a lot of turnover in Ottawa, who saw the departure of star players Erik Karlsson, Mike Hoffman, and Mark Stone. In fact, the only remaining members of the 2016-17 final roster are Nick Paul and Colin White.

In more recent years, we’ve seen a dedicated youth movement that has placed more responsibility around young players. With positive signs coming out of Ottawa, Dorion made a bold claim after signing the extension. In his eyes, the rebuild is over.

"The rebuild is done. Now we're stepping into another zone," says Dorion. #Sens

While there’s no doubt about the excitement surrounding some of Ottawa’s young guns, but some fans aren’t quite convinced that the Sens are ready to compete just yet. They’re coming off a year in which they finished with a 23-28-5 record while adopting the nickname “Sickos” in reference to the gratification of playing spoiler while not actually being in any sort of contention.

Twitter quickly lit the quote on fire with their opinions, some of which were ready to hop on Dorion’s hype train, but most that were looking to derail it before it left the station.

LMAOO WHAT. they’ve made pretty much no changes since last year, there isn’t any zone their stepping into. the team they currently have is the exact same as last year and they won’t have a chance to compete in the Atlantic.

I am beyond scared with that statement tbh...

If his next sentence wasn't "The DANGER zone!" I'm gonna be very disappointed

What did Ottawa do in the off-season?

That’s fantastic to hear. Onward and upward to BIG things for this team in the next few years.

Shouldn't they be making the playoffs first before saying something like this?

What do you think, is there any truth to Dorion’s comments? Let us know @BarDown!