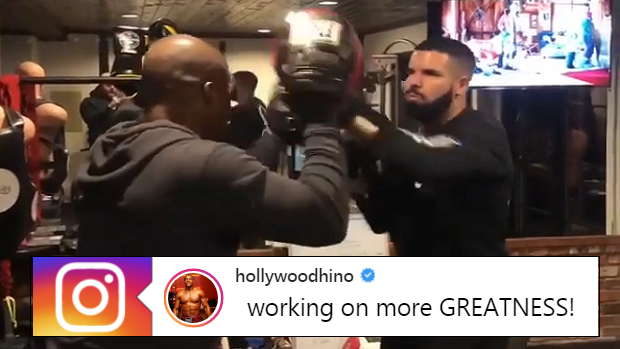 Drake works on his boxing with trainer Hino Ehikhamenor. , Hollywoodhino/Instagram

Drake’s athleticism is no secret. Most of his fans know him to be a pretty solid ball player (and fan for that matter), but now it’s looking like he’s taking his talents to another sport…

Drake’s preparing for his upcoming ‘Assassination Vacation’ tour in Europe and he’s looking to shed a few lbs before rocking the stage. @hollywoodhino (aka Hino Ehikhamenor) has been training with the 32-year-old and we’ve gotta say, Drizzy’s got some serious moves with boxing mitts on.

on a Sunday night while our opponents are RESTING & eating taco - we’re working on more GREATNESS! The Assassination World Tour begins in a few weeks - STAY READY!!! @champagnepapi 🦉 @ovoroxx 🦉

Drake’s love for boxing is nothing new. He introduced Flloyd Mayweather and Connor McGregor for a press conference in Toronto ahead of their infamous tilt, where he also hugged it out with stars such as Sam Watson, a member of Mayweather’s entourage. It made for a pretty unreal moment.

#Drake greets Sam Watson before heading inside for the #Mayweather - #McGregor press conference in #Toronto.

As we mentioned before, Drake is pretty solid at a number of sports. Need proof? Okay, here’s him nailing a half-court shot in the #OneAndDoneChallenge.

#Drake nails the #OneAndDoneChallenge and invites #KyleLowry and #DeMarDeRozan to give it a shot. Tag two friends to the challenge. . More at BarDown.com . (Video via @dribble2much)

Some more? Okay! The man can rally pretty well with a ping-pong paddle in his hand, too.

And of course, the Toronto native can skate as well.

If you want to cheer on Drake playing sports that’s one thing… just make sure he’s not cheering for your favourite team!