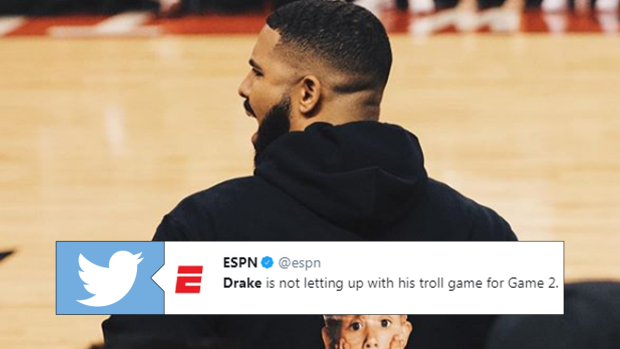 Drake has been a thorn in the side of Toronto Raptors opponents all playoffs long. He can be seen in his familiar seat at Scotiabank Arena, chirping the opposing players and cheering on the Raps in a very animated fashion.

He also calculates what he’s wearing VERY carefully. In Game 1 of the NBA Finals, he famously wore a signed Dell Curry Raptors jersey. In Game 2 he wore another outfit that took a shot at the Warriors, specifically trolling Kevin Durant.

.@Drake wondering where @KDTrey5 is? 👀😂 pic.twitter.com/roKtSE2yFT

Kevin Durant has been out since suffering a leg injury in the West Finals. It’s a huge loss for the Warriors who are trying to even up the series with the Raps, and it’s unclear when KD will be back. It is believed he may be available sometime mid-series.