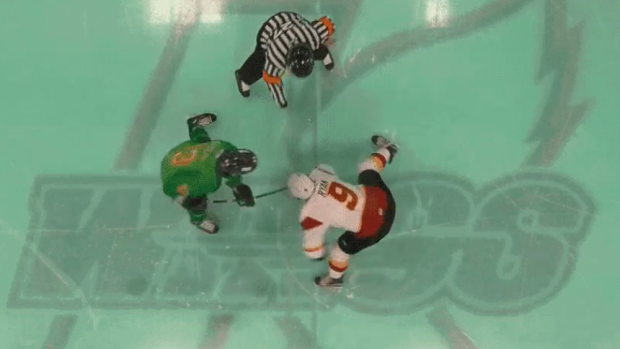 St. Patrick's day is associated with one colour, green.

Everything's green for one day of the year, from beer, to outfits, to ice.  Yes, you read that correctly, ice.

The Kalamazoo Wings played on St. Patrick's day Friday and if you were watching the game, something immediately stood out.

They played the game on green ice!  How's that for a creative way to celebrate St. Patrick's day?

The 'Green Ice Game' tradition started back in 1982 when the Wings franchise dyed the ice with food colouring to become the first pro hockey team to ever play a game on coloured ice.

36 years later, the tradition is still alive and well.  Here's a behind the scenes look at the ice getting dyed for the game.

Don't worry* if you spill your $2 green beer at tomorrow's game, it'll blend right into the ice.

*You'll have to get another one, though. pic.twitter.com/w9FmbhZQR0

Don't be fooled by the goal GIFs the team tweeted out, the ice was green.

First, @pschneids91 ties the game for the good guys with his 13th! Then, @LScheidl92 dials this one up to break the tie! #LetsGoWings pic.twitter.com/mVO837iHyM

Kalamazoo didn't get the win, but they carried on one of the coolest and most unique traditions in hockey, which is as good as a win in our eyes.

We didn't get the result we wanted, but there was something that felt so right about a full @WECkzoo on St. Paddy's day. #ThankYouFans pic.twitter.com/BvvGVbvJ8Q

Plus, they rocked some incredible jerseys, too.

Don't miss your chance to see these beauties in person!