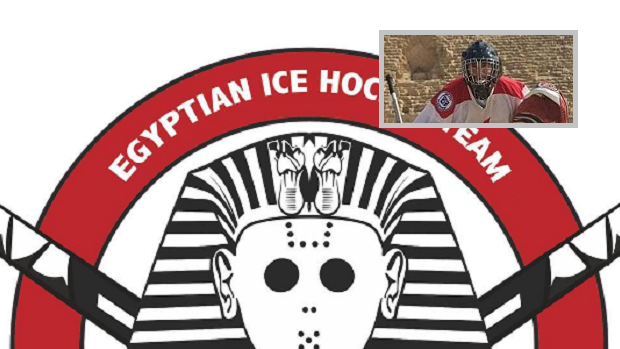 One of those teams is the Egypitian squad, Cairo Anubis – which would basically be Egypt’s national team if not for some IIHF regulations. The second African Ice Hockey Cup has yet to be announced, but in an interview with EuroHockey.com’s Steven Ellis, a key member of the Egypt Ice Hockey Board suggested that they were hoping to have another one.

Regardless of whether or not that event takes place, Egyptian Ice Hockey is going to continue to try and grow. If it does, picture like this one posted to their social media might not be so unique for long.

For now, this is the only photo we can find of someone dressed in full goalie gear in front of the Egyptian Pyramids.

Adrian Mizzi the traveling goalie has arrived in Egypt.

We can’t imagine how hot that goalie is right now.

That goalie is Adrian Mizzi, a man that goes by the nickname “The Travelling Goalie”. He keeps a blog about all of the different places he plays in net and apparently Egypt is number 36 on the list.

Part of the reason that Mizzi went to Egypt was to help grow the game at the grass roots level and even spoke about getting a young girl who was playing without gloves some more equipment, but the higher level players are still training in more developed facilities.

According to Sameh Ramadan, the Egyptian Hockey Board Member mentioned above, the team practices in Cairo, New Jersey and is hoping to start a base in Montreal as well.

We hope they continue to grow and we continue to see unusual photos like this one that can really show the growth of the game.

They’re already represented in the Hockey Hall of Fame, maybe the photo above should be added too.