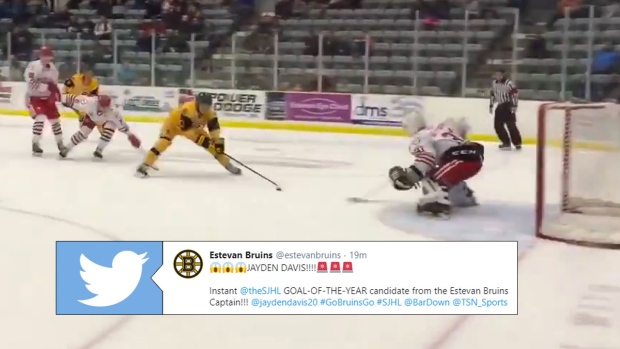 The Estevan Bruins hosted the Weyburn Red Wings in Saskatchewan Junior Hockey League action on Friday night and the home team got off to an extremely hot start.

Thanks to three goals in the opening period, the Bruins took a 3-0 lead into the second period but it didn’t last long as the Red Wings got on the board just over one minute into the period and made it a one-goal late in the frame.

However, Bruins captain Jayden Davis wanted to make sure his team had a larger lead heading into the final period and he did so by scoring an absolutely filthy goal.

Davis turned on the jets in the neutral zone and blew by the defender with ease before making an extremely difficult move and goal look absolutely effortless.

Wings win the period but Jayden Davis for the Bruins has a goal of the year candidate to keep this at a two goal lead after two.

Talk about taking back the momentum in style. ​