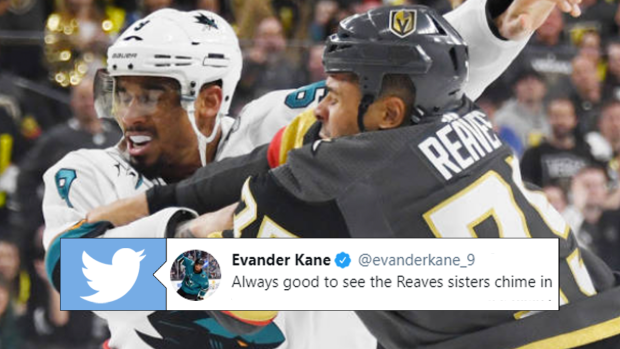 In today’s NHL, you don’t have as many of the intense personal rivalries as you used to, particularly with the age of the enforcer declining. You just don’t see the wars that you used to between Bob Probert and Tie Domi, or Donald Brashear and Geroges Laraque. For better or for worse, it’s simply a different game.

Saying that, it’s not like those rivalries are completely dead. There are still some unsettled beefs that may never be figured out, and likely the largest one still existing in the league is between Evander Kane and Ryan Reaves.

The Pacific Division foes have clashed on and off the ice, and the feud reignited in a dramatic way on Sunday as Kane got into it with both Ryan and his brother Jordan, who plays in the CFL. It all started after Kane challenged Jake Paul to a fight following the internet stars’ dominant boxing victory over former NBAer Nate Robinson.

WARNING: There’s some NSFW language in the following tweets.

yo @jakepaul I’d wreck ya. Easy to beat up guys with no experience and much smaller. August 31st 2021 Vegas we can see if you really about that action. #YOURMOVE

😂boy if you don’t sit your soft ass down 😩😂 https://t.co/xeoJmxxLY1

Always good to see the Reaves sisters chime in and try to hop on the coat tails @JReaves77 @reavo7five but that’s okay I’ll keep you both relevant.

😂 might be the only billboard you’ve ever been on.

Don’t do that😂 you wouldn’t look me in the eye without shittin yourself don’t be tough behind your screen 😂 I know kids with more fight than you stop that little boy https://t.co/IOt8PPmHbn pic.twitter.com/YNHCxPC26M

We haven’t heard from any of the involved athletes in a few hours, so that may be the end of this flare up. It’s almost definitely not the end of the beef, however.