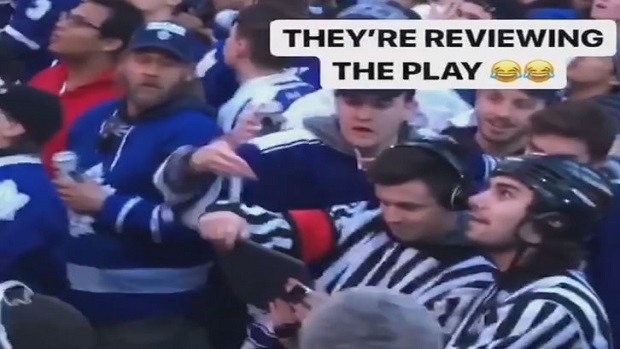 Everyone’s favourite officials were back at Maple Leaf Square on Monday night for the important Game 6 matchup between the Toronto Maple Leafs and the Boston Bruins, and the fans weren’t as polite to them this time around.

The duo first made an appearance at Maple Leaf Square during Game 3 but didn’t have to do much during the game because it was a pretty uneventful affair between the Original 6 rivals. However, every game since then has gotten a little more intense and the referees had a lot more on their plate for Game 6 on Monday night as they were forced to overturn a Leafs goal while standing in the middle of rowdy Leafs fans.

Wait for the reaction! The Maple Leaf Square refs reviewed the goal 😂😂

The crowd was furious with the officials after what appeared to be a good goal by the Maple Leafs was overturned. However, they seemed to get back on the crowd’s good side by the end of the night as the Maple Leafs came out victorious to force a Game 7.

The Maple Leaf Square officials have been on their A-game all series long and they’ve been on top of every play of every game, even with a bunch of fans screaming in their ears while they try to get the calls right.