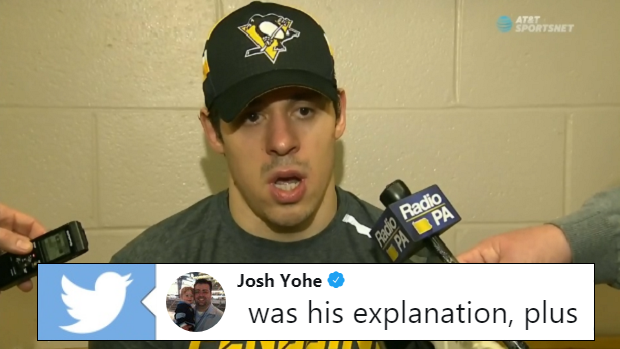 Evegni Malkin was the talk of the hockey world for all the WRONG reasons last night after a scary incident involving Philadelphia Flyers forward Michael Raffl. Malkin was assessed a match penalty with 4:54 left in the third period after swinging his stick one-handed at Raffl’s face. The move was in response to Raffl throwing a punch at the back of the Russian’s head.

Luckily, Malkin’s stick barely missed Raffl and avoided a scary incident. That, Malkin insisted, justified him not receiving a suspension. At least that’s what he said following the game.

The following is an excerpt from Josh Yohe:

“It’s not like I broke his face”… interesting Geno. He even called Raffl out later for embellishment on the play.

He said the following in his post-game scrum:

“I’m not trying to hit his face… I know it's dirty, but I missed, my stick (did) not touch his helmet or shoulder” Malkin said. "He just like dived and the referee give me five minutes. Nothing like dangerous, (he's) not bleeding, nothing. I know I gave them a five-minute power play, but it's my fault for sure. Play smart next time.”

Malkin also added that Raffle “played dirty” leading up to the incident.

The 32-year-old will have a hearing on Tuesday and even if he disagrees, there’s definitely a chance he can still miss time in the future.

Malkin to have hearing for slash on Raffl. MORE: https://t.co/nMM9R58GZ0 pic.twitter.com/1Y7ZxafPoG