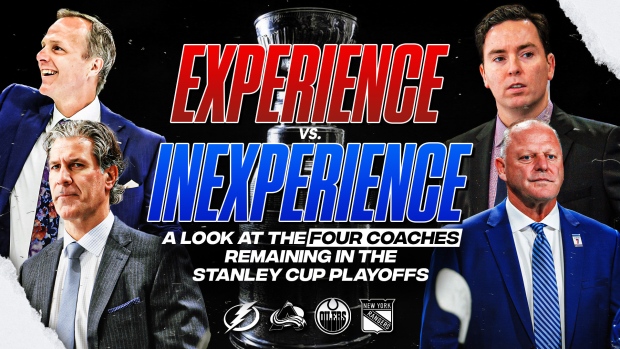 The Stanley Cup Playoffs Conference Final matchups are officially set and BOY, are we excited.

The New York Rangers secured the last remaining spot with a strong 6-2 Game 7 win over the Carolina Hurricanes on Monday. They will take on the Tampa Bay Lightning in the Eastern Conference Final while the Edmonton Oilers will meet the Colorado Avalanche in the West.

Hockey fans got lucky with this one!

The last round before the Stanley Cup final will feature two of the most intriguing matchups in hockey.

Andrei Vasilevskiy will meet Igor Shesterkin in the East, while Connor McDavid will go up against Nathan MacKinnon in the West. You know,  just a couple of the NHL’s most offensive players and two of the strongest goalies in the league battling for a spot in the SCF.  *screams internally*

What more could hockey fans want? With everybody excited to see each pair go head-to-head, everyone seems to forget about the next important thing: the coaches! When it comes to experience, the contrast is pretty interesting.

BEDNAR VS WOODCROFT
Jared Bednar and the Avalanche are going up against Jay Woodcroft and the Edmonton Oilers. When it comes to head coaching experience, Bednar wins the race. While the Avs head coach has been coaching in the league from 2016, Woodcroft is in his first stint as head coach. The Oilers hired Woodcroft towards the end of the 2022 season as a replacement for Dave Tippett. Despite this being his first year as HC, he’s served several years behind the bench as an assistant in the league. He spent seven years with the San Jose Sharks and began his relationship with the Edmonton Oilers franchise in 2015 to 2017. On top of that, Woodcroft won a Cup with the Red Wings in 2007 when he served as the team’s video coach. With that said, one thing they do have in common is that neither of them have ever actually played in the NHL

GALLANT VS COOPER
It’s pretty safe to say that Lightning’s Head Coach Jon Cooper has a pretty big advantage over Gerard Gallant. You can’t really compare the experience in winning back-to-back Stanley Cup Champions to a coach who just joined the team in the offseason. With that said, Gallant brings a lot to the table. With 13 years of being a head coach under his belt, he can’t be underestimated. He completely transformed the Panthers in 2015-16 to their franchise-best (prior to this season) 103 points and then promptly led the Vegas Golden Knights to the Stanley Cup Final in their inaugural NHL season.

Which coach will lead their team to the Stanley Cup Final?