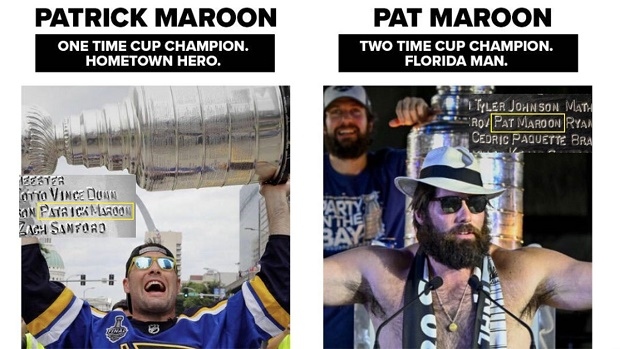 Of course, Maroon nabbed his first Stanley Cup win in the 2018-2019 season with the fairy tale, worst-to-first St Louis Blues victory that made him a hometown hero.

This year, he took a leap and signed with the Tampa Bay Lightning. The addition of Maroon was one of the changes that finally propelled the Lightning past the playoff growing pains that had been plaguing the team in previous seasons, all the way to Lord Stanley.

alexa play “let her cry” by hootie & the blowfish pic.twitter.com/Mzu2xmHIRH

Not a bad couple years for Maroon, huh? His name was etched on to the Cup to live eternally in hockey history two years in a row, but fans have noticed something confusing about the way it was etched in each respective year. When he won with the Blues, his name was engraved ‘Patrick Maroon’. This year with the Lightning, though, it was simply ‘Pat Maroon’, as was pointed out by a whole lot of Twitter folks in this thread where both years are visible.

He’s fully embraced life as a Florida man, with a completely new persona.

I see Maroon is etched on the Cup as "Patrick Maroon" for the Blues ..very formal😂

He is now "Pat Maroon" for the Bolts...he became Florida Man and now spends his time wrestling gators when not on the ice👍

Maroon legit turned into party Florida man in one year. Dropped the business part of his name. If TB wins next year he is gonna have his name engraved as “Big Rig” and the transformation will be complete. pic.twitter.com/4MoIHcEqC0

Will Pat Maroon win another Cup and revert all the way to P. Maroon? We’re not sure, but his celebrations are thoroughly entertaining, and we would definitely be interested in seeing another one of them.