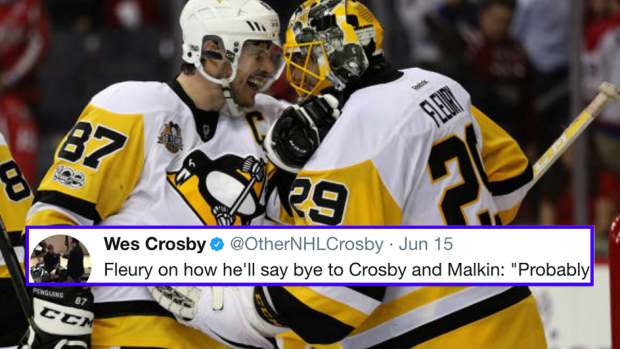 Matt Murray is the new man between the pipes now, though, and Fleury was nothing but a wonderful teammate this season when Murray cemented his place as the Pens' number one goalie.

Still, without Fleury, Pittsburgh wouldn't have won a Stanley Cup and it was a storybook ending to this chapter of his career.

When the Penguins spoke to the media on Thursday, Fleury had a tough time as it was an emotional moment for him.

Fleury is getting slightly choked up. #Pens

Fleury on the reception he had at the parade: "People chant my name the old way. It was a little emotional." #Pens

Among other things, Fleury was asked how he'd say bye to Evgeni Malkin and Sidney Crosby, and he was his humorous self when answering the question:

Fleury on how he'll say bye to Crosby and Malkin: "Probably don't. Just walk away." He says with a chuckle. #Pens

It's a funny and emotional answer all in one.

Fleury, Malkin and Crosby came into the league at relatively the same time (Fleury drafted 1st overall in 03, Malkin 2nd overall in 04, Crosby 1st overall in 05) and they helped turn the Penguins franchise into a powerhouse once again.

We imagine these last few days have been very tough for Fleury, but a new chapter of his career is on the horizon and Penguins fans and his teammates will never forget him.

Fleury on what he would miss the most about Pittsburgh: "Everything." #Pens