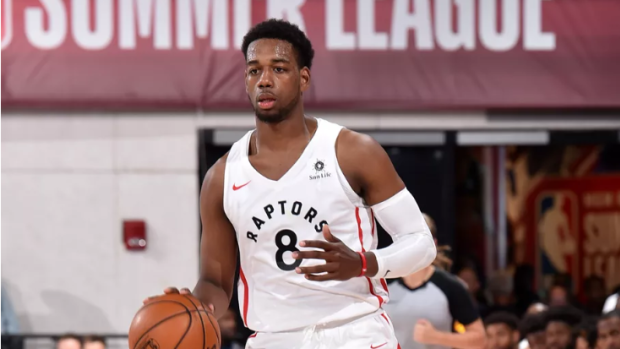 As one of the Toronto Raptors’ two-way players last season, Jordan Loyd wasn’t eligible to play for the team in the playoffs, but he was a part of the team’s championship experience. It’s always nice for a young player to experience a winning program firsthand — and evidently, Loyd was able to learn a thing or two from Kyle Lowry.

After the Raptors’ Game 4 win against the Golden State Warriors to go up 3-1 in the series, Loyd recounts the excitement he felt at being just one win away from the championship — as well as Lowry making sure to check Loyd’s excitement before the job was done.

After watching episode 4 of the last dance I couldn’t help but think of some moments from last years championship run with the raps. One moment particularly sticks out to me .....(see next tweet)

After Game 4 in GS we have one more win until we’re champs. Now remember I don’t play or dress. I’m walking off the court all excited and smiling. Not thinking anyone is paying attention to me of course KLow comes up to me and is like what’re you smiling for?.....(see next tweet)

He’s like is the job done? Have we won yet? Take that smile off your face. We ain’t did s***Now first off this shows the type of mental strength & toughness you have to have to compete at the level he was playing at. It also shows how much of a team guy he really was (nxt tweet)

Secondly For him to even worry about the last guy on the roster in that moment says so much about his character and how much he valued everyone in that locker room. He wanted everyone to have that desired drive to win. No matter your role........ (Next tweet)

Then he goes on 2 games later to arguably have his best game of his career and help us get a ring. Despite all the people that constantly doubt him. Now as a player No matter what level, I know what it takes mentally to achieve something at the highest level. Physically is next..

I’ll cherish that run forever and look to build from all the priceless things I learned and saw. Some special people on that team and I’m grateful to have been a part of it 💯

The Raptors waived Loyd in the offseason and he’s currently under contract in the Euroleague, but like the man said, being a part of that championship team was a valuable learning experience even if he didn’t contribute on the court directly.

And, of course... Loyd got himself a championship ring, too. That’s always nice!

As for Lowry, it’s no surprise that he would be the one with words of wisdom in the locker room. Can you think of a better leader?!