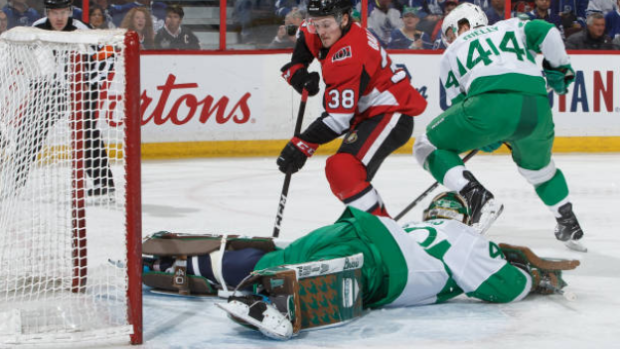 The Toronto Maple Leafs are plummeting at one of the worst possible times of the season.

As most contending teams put it into high gear heading into the stretch run, the Leafs are being exposed for their lack of defensive zone coverage.

Following losses to the Tampa Bay Lightning, Chicago Blackhawks and nearly losing the Philadelphia Flyers, the Maple Leafs were victimized by the 31st place Ottawa Senators on Saturday in a 6-2 crushing defeat.

In their last four games alone, Toronto has allowed 23 goals, an average of 5.75 per game. Garret Sparks, who had to relieve starter Frederik Andersen in back-to-back games, got the start on Saturday and didn't hold back his thoughts on the team's recent struggles.

Mike Babcock laid the blame on his players, and didn't hold back on the team's spotty coverage in their own end, and made note that the goaltending simply needs to be better as well.

Babcock: "Being a pro is getting ready each & every day & doing your part. So if you're Sparky your job is to stop the puck & if you're a d-man it's to move the puck & keep it out so everyone just do your own job & we'll be fine."

Sparks: "It's been challenging. Me & Fred both have been trying to make saves for this team & that's all we ever try to do. We know we're missing some guys but we also have some pretty good players in the lineup in their place so we're not going to use that as an excuse ..."

Sparks allowed six goals on 44 shots in the loss. He made a couple of key saves to keep the Leafs in the game but also was caught out of position on multiple goals. Hockey is the ultimate team game, and while it's difficult to solely pin the Leafs struggles on Sparks and the goaltending, the 25-year-old backup saw his numbers drop to 7-7 with a 3.24 goals against average and a .902 save percentage.