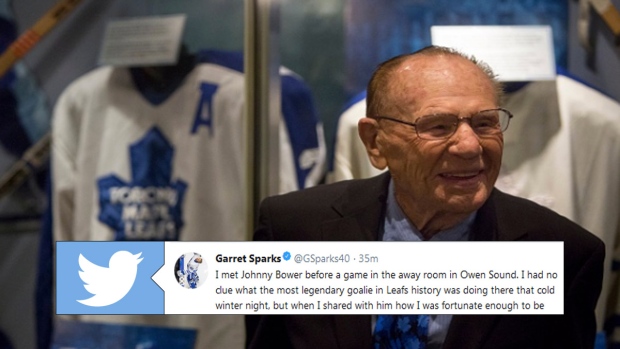 The sports community and the world as a whole lost a great human being on Tuesday evening as news broke that NHL legend Johnny Bower had passed away at the age of 93 after a short battle with pneumonia.

Whether or not you actually got to see Bower play during his prime, you knew that he was a key staple in the Toronto Maple Leafs organization and he truly was the poster boy for what being a Maple Leaf truly meant. He was full of energy and love and anyone who got the opportunity to interact with him knew he was full of awesome stories as well.

One person who had the privilege of taking part in a one-on-one conversation with the NHL legend is Toronto Maple Leafs prospect Garret Sparks. The 24-year-old was drafted by the Maple Leafs back in the 2011 NHL Entry Draft and ran into Mr. Bower shortly after the draft. On Tuesday, Sparks shared his favourite memory of Johnny Bower and it’s one that anyone will enjoy.

I met Johnny Bower before a game in the away room in Owen Sound. I had no clue what the most legendary goalie in Leafs history was doing there that cold winter night, but when I shared with him how I was fortunate enough to be drafted by the same organization he proudly backed

for so many years between the pipes, I could see the excitement he had in his eyes for me, the love he had for this team & it’s fans and the gratitude he had for the game and the opportunities it afforded him. I will never forget that encounter, the night a true legend made me

Believe that me, some kid from Chicago could be a part of the future. He personified the spirit of a true competitor, someone fueled by the pure love of representing something bigger than himself, the game and team he loved. Rest In peace Mr. Bower, the impact you left on me

pales in comparison to the impact you left on this position, this game and this organization. Nobody meant more and there will never be another. Condolences to his family, friends & millions of Leafs fans that admired a man who lived to wear the Leaf on his chest #RIPJohnnyBower

Bower played his final NHL game during the 1969-70 season, 23 years before Sparks was even born, so that shows just how much of an impact he made on the Maple Leafs organization and young fans across North America even after he was done playing.

Whether you wanted to be a better goalie or a better human being, there was no better person to learn from than Johnny Bower.