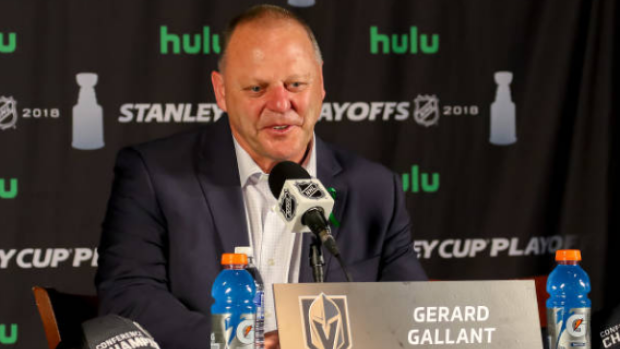 “The Florida Panthers made a huge mistake by firing Gerard Gallant, and allowing the Golden Knights to end up with Jonathan Marchessault and Reilly Smith.”

“The Columbus Blue Jakcets made a huge mistake by allowing the Golden Knights to claim William Karlsson in the expansion draft.”

We could go on with this, but we digress.

Anyways, back to Gallant. Thanks to the folks at r/hockey, video surfaced of Gallant answering a very interesting question on their off day between Games 3 and 4 of their series against the Jets on how and if he holds his players accountable whenever they make a mistake out on the ice.

“You’re not going to be perfect every time you’re on the ice, and then when mistakes happen, you forget about them and you move on. You can go over that game (Game 3 of the Conference finals) and there’s not one player on the ice who didn’t make mistakes last night. Like I said, they’ll own up to their mistakes but they don’t have to. That’s part of our game. You make mistakes, you move on, you play the next shift and you hope you make some good plays."

"Those guys are accountable guys and they work hard and they don’t got to apologize to me. They just go to go out and play their game and get better every shift they can do.”

"You got out there and if you worry about making mistakes, you’re not going to play a good game. I want you going out there and thinking you’re gonna make the good plays and do the right things on the ice. So don’t worry about your mistakes.”

What a refreshing thing to hear a coach say! A professional hockey coach doesn’t get upset when his players screw-up out on the ice. Tell that to John Tortorella.

But in all seriousness, this can go a long way for many athletes. Whenever they commit a mistake out on the ice, the majority of them know what they did, and sometimes, discipline and lashing out at them doesn’t do any good whatsoever, especially with the younger players.

When you have inexperienced players out on the ice, you almost want to let them make their mistakes in a way, so they’re able to hit up the video room afterwards and learn from them all. No one in their right mind is actually going to intentionally try make them, but considering the amount of events in hockey that occur throughout the game in the form of a pass, breakout, or rush, they’re going to happen eventually. You want players to be aggressive and take chances, but under the proper guidance.

On a team like the Golden Knights that had a ton of players that didn’t get the chance to flourish higher up in the lineup before the expansion draft, Gallant's logic here is just one of the many reasons why the Golden Knights are just four wins away from lifting the Stanley Cup, especially on a team that didn’t have many expectations coming into the season.

Let the boys play a little loose, and they will generally produce. Instead of benching them, get them right back out there so they can atone for their mistakes.