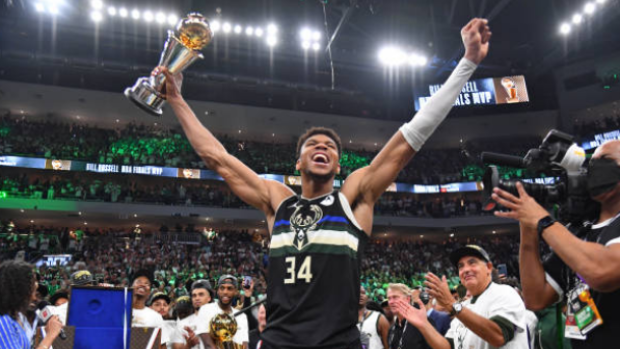 We’ve known that Giannis Antetokounmpo is one of the best basketball players in the world for a while now, but on Tuesday he proved anybody that doubted that totally and completely wrong.

Giannis dropped 50 points in the Bucks Game 6 victory over the Phoenix Suns, leading to a thrilling NBA title that the city of Milwaukee has been craving for half a century. Giannis said he wanted to stay with Milwaukee to win a Championship, and on Tuesday he followed through.

He made all sorts of nutty history along the way, too. Just take a look at some of these stats…

That's a whole lot of accomplishment for a 26-year-old... ✍️ pic.twitter.com/ij4RoK9EAL

Giannis gets his 12th game this postseason with 30 points & 10 rebounds.

That's tied with Elgin Baylor for 2nd-most in a single postseason of NBA History.

Giannis Antetokounmpo is the 1st player in NBA Finals history to average 30+ points, 10+ rebounds and 5+ assists on at least 60% shooting.

Giannis gets his 12th game this postseason with 30 points & 10 rebounds.

That's tied with Elgin Baylor for 2nd-most in a single postseason of NBA History.

Power Forwards in NBA history with multiple MVPs and a Finals MVP:

The two best PFs ever. pic.twitter.com/GZUpvnDrnF

The Antetokounmpo brothers are the first sibling trio in NBA history to all win a ring.