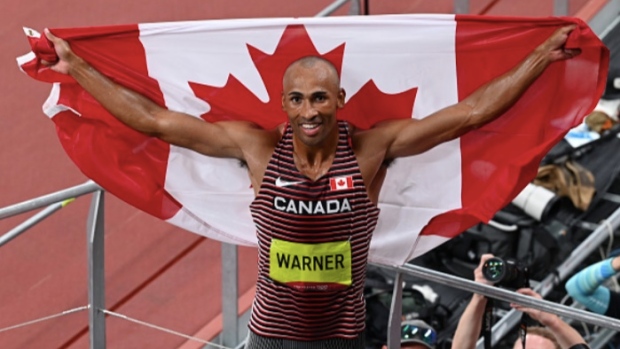 For us, the best part of the Olympics are the stories of pure grit and determination it takes athletes to get to the biggest stage in sport.

This year, with all the complications and hurdles caused by the COVID-19 pandemic, that grit and determination was taken to a whole new level.

A prime example of the unwavering dedication we just mentioned is Olympic gold medalist and record holder, Damian Warner. The London, ON, native won Canada’s first ever gold in the decathlon this morning, and the entire nation went crazy for him.

Warner is the first Canadian to win the decathlon. 👏👏👏 pic.twitter.com/LXFkd0SldG

What a moment for the Canadian!

But wait, the moment gets even MORE Canadian. When Warner was unable to train at London’s Western University during the COVID-19 pandemic, the city came together and set him up a training facility where he could train privately over the winter…in an abandoned hockey arena.

Congratulations to #LdnOnt's Damian Warner for winning the first gold medal in the decathlon for Team Canada at #Tokyo2020!

Through the COVID-19 pandemic, the City turned Farquharson arena into an athletes centre for Damian to train at in preparation for the Olympic Games. https://t.co/bdXXzBnmm8

Here's what Warner told The Star about the experience:

“Picture a really cold ice rink. And then take out the ice. That’s where we are […] If someone had told us ‘You’re going to be running inside (Farquharson)’ we probably would have cried. But we’ve come together with the community and all the athletes and put together as good a training situation as we can, and it’s been going really well.”

The fact that he was training inside a freezing cold arena makes this already incredible victory all the more impressive!

Congratulations to Warner and the city of London on this incredible feat.