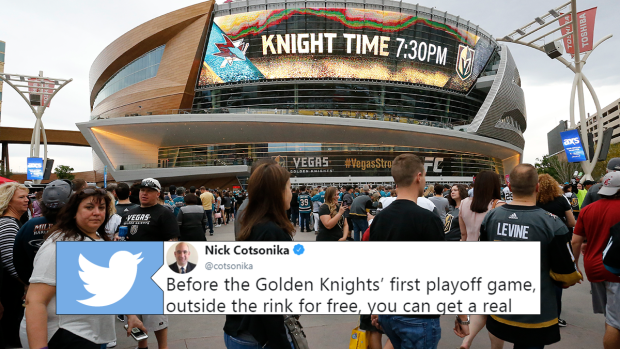 They’ve been talked about a lot, but because they have been so good from day one, it still feels like this whole Golden Knights story gets a little overlooked.

This is an expansion team that finished second in their conference, first in their division and broke just about every record held by expansion teams across all sports. Add in the tragic events that occurred right before the season, how the fans have rallied around the team and so many other storylines that occurred throughout the season as well.

Well, after a year that many will hope to never forget, the Golden Knights are offering them a way to become fans forever: Free Vegas Golden Knights Tattoos!

Before the Golden Knights’ first playoff game, outside the rink for free, you can get a real tattoo of their logo. If you aren’t that hardcore, you can get a “V” shaved in your head.

You didn't think u only had playoff hockey to look forward to did u??

This is amazing and couldn’t be a more fitting way to kick off their first NHL playoff party.

The way Vegas is portrayed in movies and TV shows, people assume a lot of regrettable tattoos come out of that city, but we’re pretty sure nobody is going to regret this one. Regardless of what happens in the playoffs, we can’t imagine this season being looked back at as anything other than a resounding success.

So, if you were considering making a Vegas trip for the playoffs, you could save some money on a tattoo.

The tattoos will be done by artists from Revolt Tattoos and while the tickets are free, you can still donate money which will go entirely to the VGK Foundation.

Attention @GoldenKnights Fans! Catch us in the plaza of the @TMobileArena April 11th & 13th! We will be doing free #VGK logo tattoos for donations with all proceeds going to the VGK Foundation! Featured artists: @joeyhamiltontat @jasontritten @kappsolutely#JoinTheRevolt pic.twitter.com/nc6w6sUilb

Of course, plenty of people are ahead of the game on this one and will be able to show up wearing their loyalty on their sleeves, literally.

Maybe it’s just me, but the @GoldenKnights are now 1-0 since I got my tattoo.. coincidence? pic.twitter.com/FpJftJq2lk