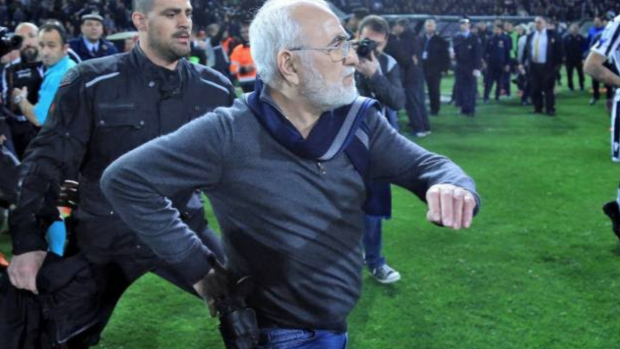 There's usually always someone upset at a referee, whether it be a coach, player, fan, or person in a team's organization, but for the most part, people upset at an official don't take things too far.

Ivan Savvidis, the owner of PAOK (a soccer team from the Greek Super League), is one of those people that may have taken things a little too far.

The Greek Superleague has been suspended indefinitely after abandonment of game between PAOK Salonika and AEK Athens on Sunday. That match was abandoned after PAOK Salonika owner invaded pitch carrying a gun. #SSN

Ivan Savvidis, owner of Greek soccer team PAOK, ran on the field after his team’s goal in the 89th minute was blown dead after an offsides call. Savvidis (as seen here) was also carrying a gun. pic.twitter.com/lt0Rr1AqlL

Meanwhile in Greece... PAOK president Ivan Savvidis takes to the pitch, armed with a gun, to remonstrate with the ref after his team had a late goal disallowed. pic.twitter.com/Vg8SjtWqY1

After a disallowed goal in the 89th minute of a huge game between PAOK Salonika and AEK Athens, Ivan stormed the field with a gun on his hip, which caused the game to be stopped.

Greek police are seeking the gun-toting owner of PAOK Thessaloniki and four others after they marched onto the soccer field following a disputed goal at the end of a league match.https://t.co/cSWMGJtHAP

The entire league was suspended indefinitely following the incident that occurred.

In order to better understand what happened, though, check out this thread which details the events leading up to the owner of PAOK invading the pitch with a gun.

PAOK score 89th minute winner to put them just one point behind AEK in table.

PAOK president storms on the pitch, officials make a run for it. Fans riot, police on the pitch. Game suspended

Having watched it, my opinion is the offside was correct, but not clear-cut. Game could continue once pitch is clear

Soccer is an absolutely insane sport and this thread reveals how insane it can be (extremely insane).

That said, there's absolutely no reason to bring a gun onto the pitch to confront an official and now the league is suffering the consequences because of Ivan's actions.