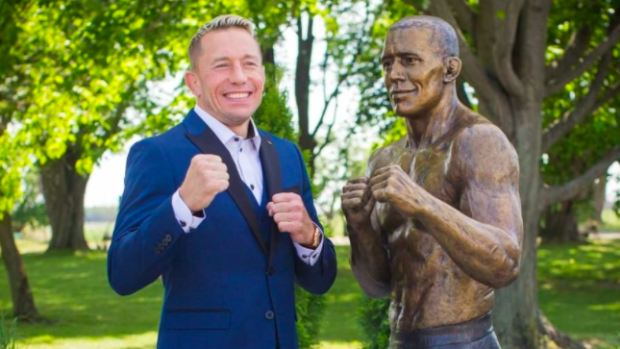 The GOAT debate is an easy one to get into.

There’s way too much room to for biases and opinion when arguing about who the best anything of all time is, so we know saying that we think Georges St-Pierre is the greatest MMA fighter of all time might rub some people the wrong way. We’re going to say it anyways, though.

When he retired in February 2019, GSP ended his career with an excellent 26-2 record. He has more title fights and fights in the UFC under his belt than any other Canadian, and now, he’s being honoured in his hometown of Saint-Isidore, Quebec, in a very special way.

The town unveiled Place GSP yesterday, which is a tribute to his legendary career.

It is the internet, though, and people managed to find a way to make this into a meme by saying the statue looks more like Barack Obama than GSP.

Unfortunately, we cannot un-see this information now that we've seen it.

It's an interesting point, but it definitely doesn’t take away from the honour.