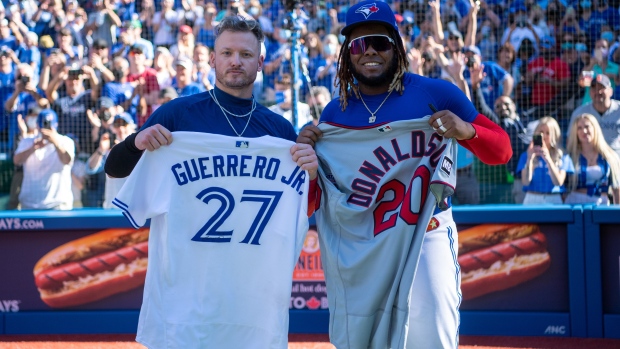 If there is a moment for Jays fans to cherish this season, then the post-game interaction between AL MVP candidate Vladimir Guerrero Jr. and past AL MVP and former Blue Jay, Josh Donaldson.

Truly, grab your tissues because this moment was pretty special.

Following the end of the Minnesota Twins x Blue Jays series on Sunday afternoon, Donaldson approached the Blue Jays dugout, greeting Guerrero before the two took off their jerseys to sign and exchange. The two then took a photo together which truly put the phrase “A photo is worth a thousand words” ***

It’s clear that Donaldson is still heavily loved by Jays’ fans even following his departure from the team, as the Bringer of Rain himself was given a standing ovation on every day of the series, with major applause during his first at-bat of the series.

It’s truly incredible to see the past meet with the present and future of the Jays and share such an incredible moment.

Toronto will always love ya, Josh!