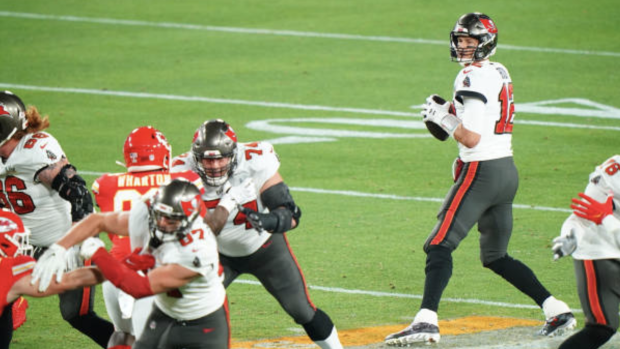 The season of giving definitely came early this year, as NFL fans from all over have been waiting for the 2021 season schedule to drop.

No more having to leak any info out guys! Phew!

Within the heavily packed 272-game regular-season schedule, there are several games that we definitely are watching. From Brady’s return to Foxborough to potential new QB rivalries, we’ve decided to highlight which games you should absolutely tune into!

Here’s our list of games that we will be circling on our calendars!

Starting off the bat as the 2021 season Kickoff Game, we are definitely going all-in with this action-filled game. As the Bucs will be aiming to go Drake on us and go back-to-back, Dak Prescott is back and healthy, giving the Cowboys a pretty good opportunity to dominate with a solid offensive line to support him.

The biggest rivalry in football may just be the Tom Brady vs. Bill Belichick saga. Oh and of course Rob Gronkowski. So we are absolutely hyped up for one of the craziest games in recent years when Brady goes back to his roots in Foxborough.

If the AFC Championship Game didn’t get you hyped up enough for the potential that the Buffalo Bills have, then Week Five is sure to highlight them as contenders. The Bills may just be the ones to give the Chiefs a run for their money as they held up an early lead within the 2020 conference championship. Though we know how that story ended as the Chiefs went on to face the Bucs in the Super Bowl, honestly we’re not turning our eyes on the Bills. We’re definitely dialled in for this game.

Now, this has to be one of the most intense rivalries in recent years. Not only do the teams have a distaste for one another but the fans absolutely despise one another. AKA, some grounds for a pretty incredible Week 8 matchup. The season ended off last year with some major smash talk between Chase Claypool and JuJu Schuster against Mack Wilson and other members of the Dawg Pound and we just are absolutely waiting to see it all unfold in Cleveland on Halloween.

Last season we saw one of the greatest quarterbacks to play the game retire following an emotion-filled NFC Divisional round. As Drew Brees walks away from the game, we will see Jameis Winston fill his new role as QB1 as he goes up against the 7-time Super Bowl champion.

Now, this is on the grounds that Aaron Rodgers will in fact still be playing for the Packers this coming season following tons of controversy that he has seen his final days in Green Bay. This match-up will be the first between Rodgers and Mahomes as we expect it to be one of the most action-pact high point games of the coming season.

Continuing our Jeopardy-filled question “Where will Aaron Rodgers play this coming season?”, we can extend that question to Russell Wilson as well, as he’s also had some reported unhappiness with the Seahawks organization. Though if both remain in their respective cities then we can guarantee these two will give us a pretty entertaining game. Though if either leaves, it’ll still make for a pretty interesting game.

Now for part three of our Aaron Rodgers series and this is a hypothetical of if Rodgers were to land in Denver. Though as the Broncos seem like the favourable team that Rodgers heads to, we will not only see him in a city with a new team behind him, but we’ll get our Mahomes vs. Rodgers match up that we are absolutely longing for.

Well, there you have it, folks! These are the games that will be patiently waiting on the corner of our seats for within the upcoming 2021 NFL season.

Do you think we missed any? Let us know below!

Which NFL game are you the most excited to watch this coming season? 🏈