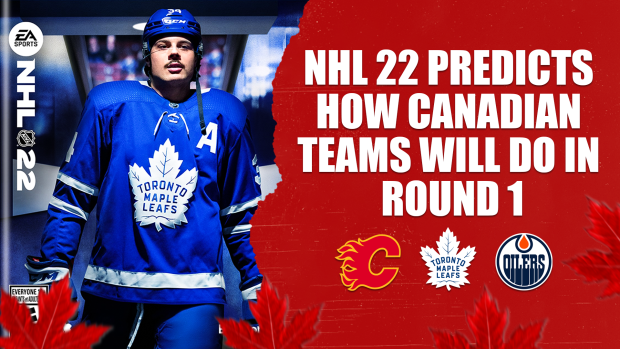 For Canadian markets, that proved to be three out of the seven teams. Toronto, Edmonton, and Calgary will be cheering on the Leafs, Oilers, and Flames as they battle for a shot at Lord Stanley’s mug.

While everyone has an opinion on what’s going to happen with the Canadian squads, we’re turning to the most reliable predictive data available to us – NHL 22.

We plugged in all the relevant information and let the simulation go to work.

Two 🇨🇦 teams start their playoffs tonight, here’s how NHL 22 predicts they’ll do in Round One.

In celebration of the Leafs and Oilers getting their series started off on Monday, we released a little video with the results. Scroll down to see the results written out, along with the Calgary results (to be released in video format tomorrow).

In summary, Leafs move up 2-0 in the series and then collapse for the final four games. Three of those four losses are one-goal games, so in other words, this one is going to sting for Leafs Nation.

In summary, Edmonton falters at home in Game 1, but they win Game 2 and close out the series with three consecutive 4-1 victories – coincidentally winning the series by that same score.

In summary, the Flames offence dries up in this series, only managing to score more than two goals in one of their six games. Not only that, they lose one HUGE in an 11-1 pummeling. This would undoubtedly be the biggest Canadian disappointment of playoffs considering Calgary is the heavy favourite in this series.