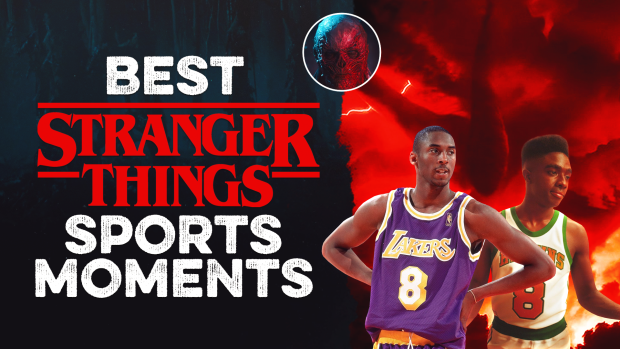 It’s without a doubt that Stranger Things has become a universally loved phenomenon.

Odds are you probably have sat on your couch for hours at a time for every season release. Don’t worry, us too!

So as a sports fan, there’s nothing better than when worlds collide (unless it’s the Upside Down, of course) and we have Stranger Things sports moments.

Especially when Stranger Things star Caleb McLaughlin revealed ahead of Season Four: Volume One, he wore number 8 for the Hawkins basketball team as a nod to his own personal hero, Kobe Bryant.

The #8 jersey Lucas wears is a nod to Kobe Bryant’s first jersey number. @calebmclaughlin is a huge fan and had the idea to pay tribute to Kobe through his character’s jersey 💛💜 pic.twitter.com/PjT9uWxbqD

So whether it’s a themed night or sports moment, we’re sharing some of our favourite all-time Stranger Things x Sports moments!

This recent moment was absolutely electric. Even if you aren't a UFC fan, you have to admit this moment was awesome.

Taking place in the fictional town of Hawkins located in Indiana, the Fever adopted the Stranger Things into not only their jerseys, but even into their starting line ups.

The Chicago Cubs might be the coolest team in the league SOLELY because they’ve hosted not one, but TWO Stranger Things nights over the last few years.

Enter the Upside Down. #StrangerThings pic.twitter.com/n6IlFP8LbR

Round up your friends, your mom, your babysitter, the tough but soft-hearted cop, your long-distance girlfriend, and even Bob. The only safe place is tonight’s @DurhamBulls game@Stranger_Things weekend is here pic.twitter.com/f8XF11hgvY

We're no Stranger to winning. pic.twitter.com/tDODCzDazq

Last, but certainly not least, a favourite moment definitely has to be when stars David Harbour and Noah Schnapp shared the news of Season 4 being released soon while on the Jumbotron!

So there you have it! If we missed a favourite sports x Stranger Things moment, let us know! @BarDown