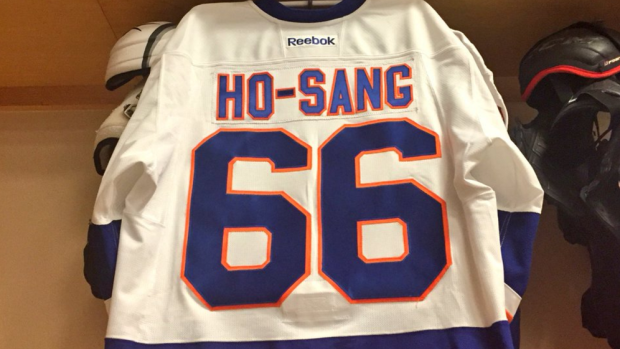 Mario Lemieux's legendary Number 66 isn't one that's been retired by the league like Wayne Gretzky's 99, and yet only six players have worn the No. 66 in NHL history.

In fact, only one player has worn the number since Lemieux retired, T.J. Brodie of the Flames in 2011.

Josh Ho-Sang made his NHL debut for the Islanders and also joined the No. 66 club (6th player to wear the number in NHL history) as he chose the number that he's been wearing since he was 15 years old.

Obviously picking such a legendary number raised a lot of eyebrows, but Ho-Sang explained the reasoning behind his number choice ahead of his first game.

Joshua Ho-Sang will be just the 6th NHL player to wear No. 66 in a game. That was a topic of discussion this morning: pic.twitter.com/M4W89sDzyA

That's a reason everyone can relate to. We all had our hockey idols and we all wanted to wear their numbers growing up.

That fact that Ho-Sang just wants to honour Lemieux by wearing his number is very touching if anything.

Although Ho-Sang was held off the scoresheet in his NHL debut, we imagine it was an incredible experience, especially because the Islanders completed the comeback to win the game.

Josh played over 17 minutes and had two shots on goal.