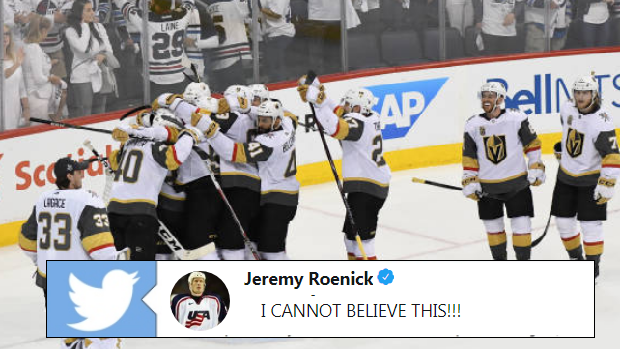 Pinch yourselves hockey fans, because what you just witnessed was real. The Vegas Golden Knights have miraculously punched their ticket into the Western Conference Final.

The Vegas #GoldenKnights are heading to the #StanleyCup Final after beating the Winnipeg #Jets 2-1 in Game 5!

Vegas entered the season with the worst odds of winning the Stanley Cup, but are now just four wins away from capturing a championship in their inaugural season. The league’s newest team hardly flinched against the high-flying Jets, cruising past them with four wins in just five total games. Vegas will now await the results between the Tampa Bay Lightning and Washington Capitals to determine who they’ll play in the Final.

Hardly anyone could believe anything the Golden Knights did this season, but here they are, competing for a chance to be named the best team in hockey. Sports fans predictably reacted to the team’s miraculous win.

The Vegas Golden Knights are headed to the Stanley Cup final in their first year of existence, Ryan Reaves with the series-clinching goal to cap the WCF; and no, I'm not on crack. Unreal !

Twelve months ago, they didn’t even have an #NHL roster. Today...

Just like that, Canada’s Stanley Cup dreams are gone.

The Vegas Golden Knights have made the Stanley Cup Final in their inaugural season. Not only that, they are 12-3 and have closed out three straight series on the road. They just beat the Winnipeg Jets four times in a row.

I think I feel best for the long-suffering Las Vegas Golden Knights fans.

“I figured the tickets were just souvenirs. It’s probably the most liability of any team (of any sport) during my 10 years here.”

— MGM sportsbook’s Jay Rood to @dougespn on Vegas Golden Knights, who were as high as 500/1 to win title & are now in the Stanley Cup Final. pic.twitter.com/TQLkFiwokZ

Ryan Reaves scored the Western Conference-winning goal for the Vegas Golden Knights. What a time to be alive.

Vegas Golden Knights fans trying to get tickets to the Stanley Cup Final.

Ladies and Gentlemen put your hands together for your 2018 Western Conference Champions...The Las Vegas Golden Knights.

The Vegas effing Golden Knights await the winner of Capitals-Lightning in the Stanley Cup Final. Amazing.

Congrats to all the long-suffering Vegas Golden Knights fans. Their seven-month Stanley Cup Final drought is finally over.

i’ve been a Vegas Golden Knights fan since i was 4 don’t talk to me about band wagoning. you stupid or something?

Crazy story. @GoldenKnights to the Finals. Greatest achievement ever for a professional team from Vegas!. (Unless you count the 1990 UNLV Runnin’ Rebels :)

The @GoldenKnights beat the @NHLJets to move on to the STANLEY CUP FINAL!!! Just unbelievable for their first season in the @NHL #StanleyCupFinals

Even Walt Disney and his Imagineers could not have written the script for the @GoldenKnights this year. #VegasBorn

The @GoldenKnights will play for the Stanley Cup!!! #StanleyCup

Thank you for a good series @NHLJets @Mayor_Bowman you represented your great city well. @CityOfLasVegas can’t wait to see you in an @GoldenKnights sweater. pic.twitter.com/aDywvVWuPp

I have all of the goosebumps! Congrats @GoldenKnights on heading onto the #StanleyCupFinals!!! Seeing how this team has taken over a city and received so much love and support. Continue making history boys!

Basically impossible to overstate how absolutely nuts it is that the @GoldenKnights — an expansion team in their very first season of existence — are going to the STANLEY CUP FINALS.

One of the all-time greatest stories in sports history. Already.

There’s plenty of haters against the idea of Vegas making it all the way. How on earth could this have happened? How did Dale Tallon in his right mind decide to expose Reilly Smith AND Jonathan Marchessault? It’s still difficult to comprehend how this team was compiled in the first place.

At this point, you may as well jump onto the Golden Knights’ bandwagon. Say what you want about them being in their first season, but what they’ve done so far has been beyond impressive.