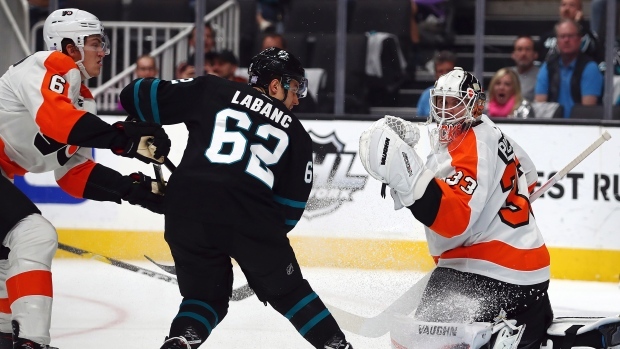 Sharks general manager Doug Wilson knows a thing or two at getting his players on value contracts.

Earlier this off-season, Wilson inked forward Timo Meier to a four-year, $24 million extension with an AAV of just $6 million.

While Erik Karlsson broke the bank with his eight-year, $92,000,000 that pays an average of $11.5 million, Wilson has been able to sign his core of Logan Couture ($8 million AAV), Evander Kane ($7 million AAV) and Brent Burns ($8 million AAV) all signed to reasonable deals.

Wilson struck again on Monday, this time inking RFA Kevin Labanc to a one-year contract. Will one-year deals aren't out of the ordinary, the dollar value of $1 million for a player who registered 56 points (17 goals, 39 assists) in 82 games last season had hockey Twitter perplexed on how the Sharks were able to sign him at a bargain of a price.

Kevin Labanc’s one-year extension is for $1 million even. A bit shocking honestly

lol ok. 2 players willing to work within SJ's cap crunch and both still set up for big pay days. Not all players have the ego of Mitch Marner

Kevin Labanc may possibly have the WORST agent in pro sports today!

For those wondering what Peter Chiarelli is up to - he is now acting as Kevin Labanc’s agent.

How did the Sharks just get Kevin Labanc for $1 million?
He either has a terrible agent or something shady is going on.#sharks

Per @KKurzNHL, the #SJSharks sign 23 y/o RW Kevin Labanc to 1 yr $1M Contract. Was RFA after ELC. Will be RFA after deal.

Rep'd by Michael Curran of Orr/Wassermanhttps://t.co/j4XqZCZWth

My prediction for Kevin Labanc's next contract is 3 years at $4M AAV. If he's going to be a consistent 60-point player going forward, he's worth more. He could also revert into a 40-point player if the magic he has with Jumbo slips. Comparables below. #NHLFreeAgency #SJSharks pic.twitter.com/PL8u4oQ1Lh

Clearly, Labanc is betting on himself to continue his upwards trajectory in points as he enters his 4th NHL season. With $8.5 million in cap space coming off the books in the form of Melker Karlsson, Brenden Dillion, Aaron Dell and Paul Martin's buyout, Labanc is aligning himself for quite the raise come the 2020 off-season.

"I’m comfortable with it, I’m confident,” Labanc told Curtis Pashelka of The Mercury News. “I’m happy where I’m at with my game, and I think the chemistry (Thornton), Sorensen and I had toward the end of the season was great.”

Excited for another year with @SanJoseSharks 🏒🦈 pic.twitter.com/amVrCxkPPv

“The combination of betting on himself with the situation he’ll be in next year, and the belief he has in himself, that’s exciting to us,” Wilson said to Pashelka. “We have no problem taking care of our own guys as they grow and evolve.”