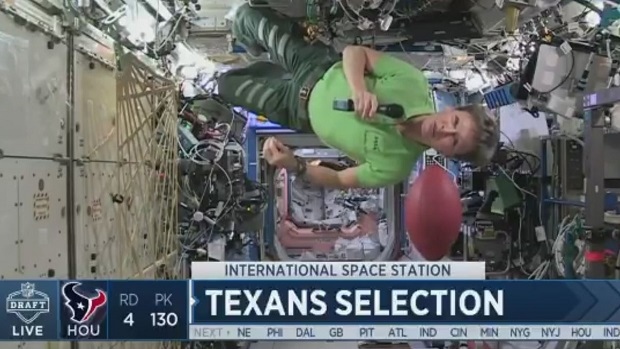 The NFL has started to spice up the selections for the later rounds of the NFL Draft.

The final day of the draft got underway on Saturday afternoon, with rounds 4 to 7 still left to be completed. A lot of teams had some interesting things planned for certain picks, and the Houston Texans were one of those teams.

Houston... we have a draft pick. @SpaceCenterHou is where we're at y'all! Coming at y'all live on #DraftDay 💁🏼🔥🔥🔥 pic.twitter.com/Cj5rz03QTy

With the 24th pick in the 4th round and 130th overall pick, the Houston Texans went out of this world for their selection as they kicked things off from the International Space Station.

The @HoustonTexans announced their latest selection...

The pick wasn’t exactly made in space, but it was made by astronaut Scott Kelly.

That was just the first of four picks that will be made from space today by the Houston Texans.

It’s safe to say that all of these players dreamed of one day playing in the NFL, they just never thought the announcement would come like this.