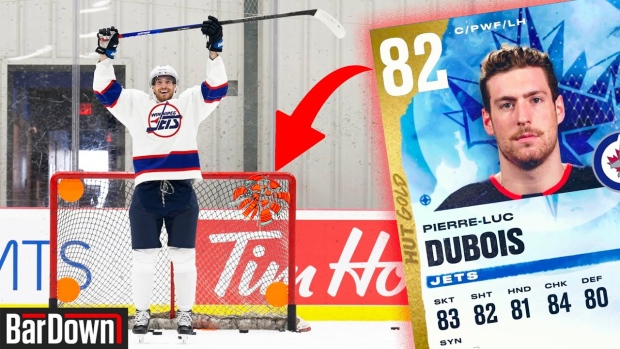 THE HUT CARD CHALLENGE IS BACK!

The boys are in Winnipeg or as Jesse likes to call it, Las Pegas. Jesse, Corwin and Z hit the ice this time around with an NHL player! The BarDownskis are joined by Pierre-Luc Dubois to see what an 82 overall player is really like in real life but more importantly to see how many times Jesse and Corwin can embarrass themselves in a single Youtube video.

While an 82 feels like a bit of a snub for a player like PLD, the fact that he is much better than that REALLY showed in the first challenge, protecting the puck. It’s safe to say Jesse and Corwin barely even saw the puck much less touched it. But we’ll let you judge for yourselves…

Then they flipped it the other way around to see how long it took PLD to steal the puck from the guys (SPOILER ALERT: It didn’t take very long). Lastly, they tested out their hand-eye coordination with a tip-in drill… it doesn’t take a genius to guess how that went.

Enough of us talking about the video, it’s time for you to see for yourself how much of an elite player PLD really is.

So now you know what 82 overall player plays like IRL but our favourite moment was definitely when PLD took a slap shot with Jesse’s beloved flame tape!

Which player should the BarDownski’s faceoff against next? Let us know @BarDown