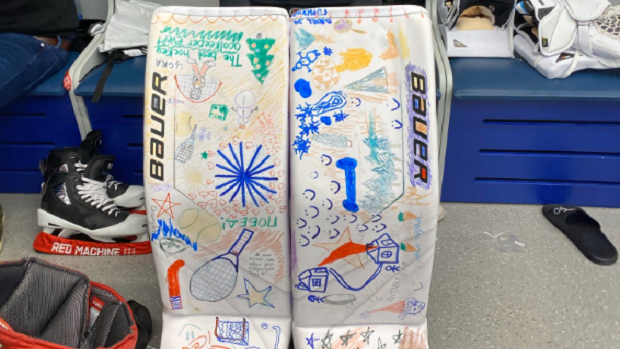 To start this article off, we'd just like to say that the KHL All Star Game looks like an absolute hoot.

The only thing that could make it better? A good cause.

IIly Sorokin, the goalie for CSKA Moskva, had his pads for the event decorated by children at a pediatric institute, and it's one of the sweetest things we've seen today.

Ilya Sorokin poses with his pads for me, decorated by children at the pediatric institute. They will go to auction after the game as a fundraiser for Vilen Prokofyev, a young Kazakh goaltender who fights cancer. @hccska #KHLAllStars #isles pic.twitter.com/w2HmGgYeJu

My favorite messages on Sorokin’s pads are “the best hockey goalkeeper ever” (😭) and удачи «good luck!» Ilya’s favorite is the blue ‘skateboard’ on the left...Kaprizov had some comments about his interpretation, which I’ll leave off of your feed :) pic.twitter.com/btkAwgWs3O

The pads will be auctioned off after to support a young goalie currently battling cancer.

Sorokin was a third round draft pick for the Isles in 2014, and won an Olympic Gold Medal with Russia in 2018.