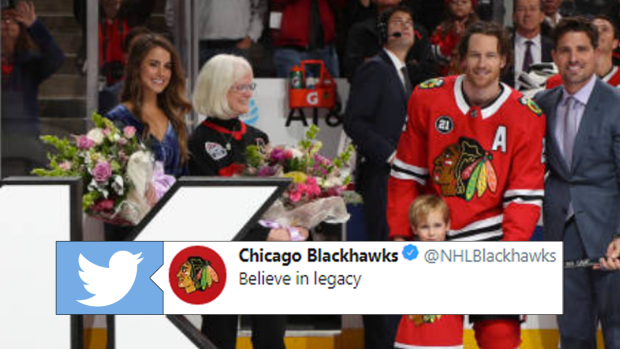 Duncan Keith may not be the super defender that he used to be, but he’s become a major part of the Chicago Blackhawks’ identity. Through the years that many considered to be Blackhawks dynasty years, Keith was a consistent, reliable part of their blue line.

He was rewarded with a Conn Smythe trophy as MVP of the ‘Hawks 2015 Stanley Cup victory, one of the highest individual achievements you can obtain in hockey. On top of that, he’s won two Norris Trophies as the league’s top defenceman, two gold medals representing Canada, and has been voted to the all-star game four times.

Needless to say, Keith is an important member of the Chicago Blackhawks, and also a testament to what it takes to be a long-tenured, effective defenceman in the NHL. Now he can add to the list of career achievements, 1000 games played.

In honour of the moment, the entire Blackhawks team dressed up in Keith’s iconic #2 for warmups ahead of their tilt against the St. Louis Blues.

The Blackhawks donned Duncan Keith (@dk_2_) jerseys for warmups ahead of his 1,000th game (via @nhlblackhawks)