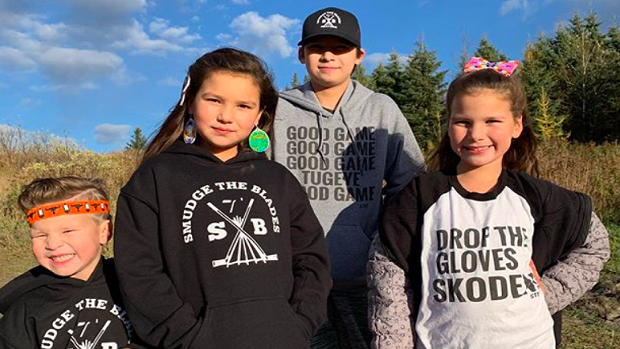 Photo via Smudge the Blades

The holidays are just around the corner, and if you’re anything like us, then pretty much everyone on our list is a hockey fan. We’re not quite able to cover a jersey for everyone on our shopping list this year, and tickets are out of the question for these COVID holidays. However, we think we just discovered a site which has something for every hockey lover that won’t just look great, but will also give back to a great cause.

Enter Smudge the Blades, which is an Indigenous-run hockey apparel company that believes ‘First Nations hockey in Canada isn’t just a sport, it’s a cultural celebration’. The brand is the brainchild of Harlan Kingfisher, a father of four from Sturgeon Lake First Nation in Saskatchewan, which is about 150 kms north of Saskatoon.

Kingfisher told CBC that "We take pride in our First Nation hockey, that's one thing that brings us together." He went on to explain that the name ‘Smudge the Blades’ is inspired by his own ritual before hockey games, which was to use sweetgrass and smudge his hockey stick and skates in order to play well. In many First Nations cultures, smudging is a tradition that is used to purify or cleanse using the four sacred plants - cedar, sage, sweetgrass, and tobacco. Kingfisher has come up with some awesome designs to launch.

Logo hat and logo crew neck! This is the perfect sweatshirt for everyone! My son says it’s so comfortable, my wife says it’s the perfect sweatshirt to wear with leggings and I think it looks real deadly! Here’s a bit of the meaning behind our logo. It’s two hockey sticks as part of a tipi all coming together. Cree tipi teachings teach us that the poles represent that we all need the strength and support of our families and communities, even though we all take different paths and point in different direction we rely and lean on one another. The hockey, specifically the native hockey, community has been a source of strength and support through out my entire life. It was a hugely positive part of my family life growing up, it’s through hockey I met many of my best friends, and my wife! As an urban native living away from my community native hockey tourneys are a place I can go to reconnect with my culture and be around other First Nations people. The hockey community taught me important teachings and held me up to be the better person I am today. It’s also said in Cree teachings that the tipi represents women and since my very first hoodie idea was the #hockeykokum it seemed fitting since where would any of the hockey community be with out the hockey moms and kokums! They are often the ones getting kids up early to practices and games, cheering in the stands, on the bench as a coaches or managing the teams! Smudge the blades is a hockey brand that is here to celebrate our community, appreciate hockey parents and hockey players who love the game, and celebrate First Nations culture! Light your sweet grass or sage smudge your gear, chew your rat root, let your braids hang out of your helmet, dance to pow wow between plays, wave to the elders wrapped in star blankets in the stands, speak your language in the dressing room and feel your ancestors watching you proudly as you play and learn and struggle and survive and grow! That’s what this logo and this brand represents! Indigenous people and allies alike can wear it know that they are supporting this hockey community! #nativehockey #firstnationshockey #hockey #hockeygear #firstnations #firstnationsowned #yeg #cree

Kingfisher grew up playing in First Nations hockey tournaments, where he remembers the passionate support from local crowds, among many other positive hockey memories. However, he also remembers how expensive the sport was, and wants to help alleviate costs to help more Indigenous people get involved in the sport. On Smudge the Blades’ website, he writes the following:

I’m Harlan Kingfisher a husband, a dad of 4 and First Nations hockey player from Sturgeon Lake Saskatchewan. Playing hockey growing up and eventually moving around Canada playing junior and college hockey had such a positive impact on my life. I learned life skills from hockey that helped me to grow into the father, husband and man I am today.

First Nations hockey in Canada isn’t just a sport it’s a cultural celebration. Nothing beats a game where the stands are packed with fans cheering for their home Rez, pow wow playing on the speakers before plays, bannock and stew being served at the concession, sweetgrass getting lit and smudging the sticks before a big game. Hockey is good medicine and that’s where I got the idea for Smudge the blades apparel.

I want to celebrate First Nations hockey and be able to bring laughter and pride when wearing your Smudge the Blades gear. It’s also my dream to be able to give back to the First Nation hockey community so that it can have the same positive impact on other Native kids that it had on me. A portion of the proceeds will be given back to help First Nation youth across Canada purchase new hockey equipment so they can have a chance to Smudge, Snipe and Celly.

The brand has a wide selection of designs that features Cree syllabics and other clever sayings, and we definitely need to get our hands on a piece or two before the holidays.

We highly recommend you do the same!

(H/T: CBC and IG/Smudge the Blades)