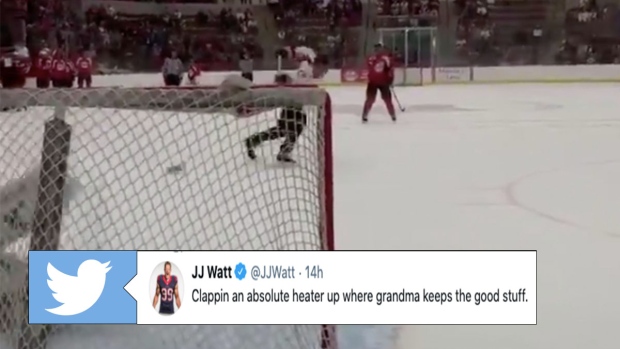 As soon as J.J Watt announced that he'd be testing the waters of free agency, people went into a bit of a frenzy trying to figure out what his next move might be.

By a bit, we mean a massive frenzy.

Even the NHL's Minnesota Wild decided to throw their hats in!

Did you say Wild, @JJWatt?! pic.twitter.com/xsXxWGMOEe

We're not sure if they knew this at the time, but Watt is actually a pretty big hockey guy.

Just check out this absolute laser of a shot he let go back in 2015!

He definitely looked like he knew what he was doing out there, but he doesn't just walk the walk, he also talks the talk!

Watt released this tweet after the video of him on the ice resurfaced, and he definitely has hockey lingo under control.

Clappin an absolute heater up where grandma keeps the good stuff.

Just wish I had the lettuce and lip sweater to match the dangles.

Wouldn’t mind doing a few years on the pond after I hang up the cleats someday.

The only thing that was missing there was 'pucks in deep'. J.J. is definitely a hockey guy!