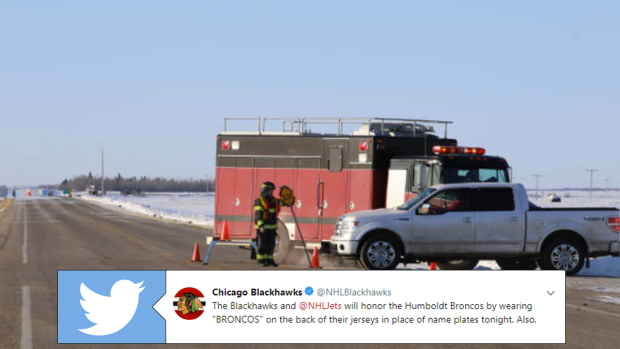 The hockey world was dealt a gut-wrenching blow on Friday evening when word came out that there had been an accident. The Humboldt Broncos SJHL hockey team had been involved in a crash where their bus had collided with a Transport Truck. As a result, 14 passengers lost their lives. 15 more were injured.

The unimaginable pain that comes with tragedy is also met with waves of support from the community, the country, and the hockey world in general. On Saturday, two of the most iconic hockey teams to ever lace ‘em up, the Chicago Blackhawks and the Winnipeg Jets, announced that they would be paying tribute to the victims by replacing their nameplate to read BRONCOS instead.

On top of the tribute plates, both franchises, as well as the NHL, will be contributing $25k to the 50/50 pot, in which all of the proceeds will go towards support efforts.

Thoughts and prayers to all the players and families of the Humboldt Broncos! #PrayersForHumboldt #HockeyFamily

🎥 "We're all thinking about you guys and praying for you guys." Adam Lowry on the Humboldt Broncos bus tragedy. #PrayersForHumboldt pic.twitter.com/dMTS0bMNsh