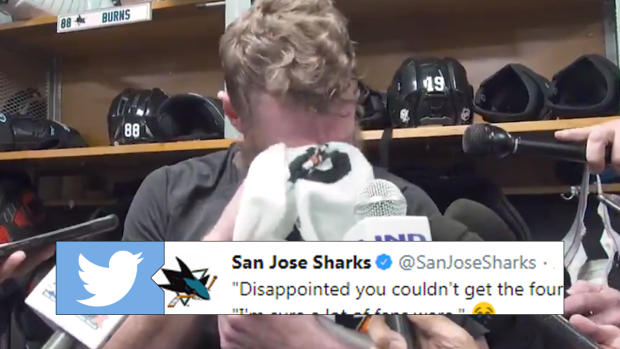 Joe Thornton is an absolute legend in the NHL, but one thing he has never been known for is scoring goals.

He only scored more than 30 goals twice in 22 NHL seasons and his hat trick on Monday night was his first in nearly a decade. However, fans weren’t happy with three, they wanted him to score four. Thornton made headlines in 2013 when Tomas Hertl scored four goals because he said he would be… we’ll say “excited” to score four goals himself.

He clearly hadn’t forgotten about his quote and neither had the fans, who he knew would be disappointed.

"Disappointed you couldn't get the fourth?"
"I'm sure a lot of fans were." 😂

Thornton was trending worldwide last night. Twitter was going crazy for the possibility of 4 goals. If you don’t know why, google Thornton and his comment after Hertl scored 4 . https://t.co/weExCCuHeR

Thornton with a hat trick.

Does his 4 goal “promise” still stand?#sjsharks

If Joe Thornton miraculously gets 4 goals, I’m waking my goddamn husband. I don’t care how mad he gets. Have to see if this man keeps his word. pic.twitter.com/6hdWVhjYqi

While fans didn’t get that fourth goal, it was still very entertaining as Thornton was pumped up on the bench.

Pure joy from Joe Thornton after completing a hat trick against Boston pic.twitter.com/eafcEH8m16